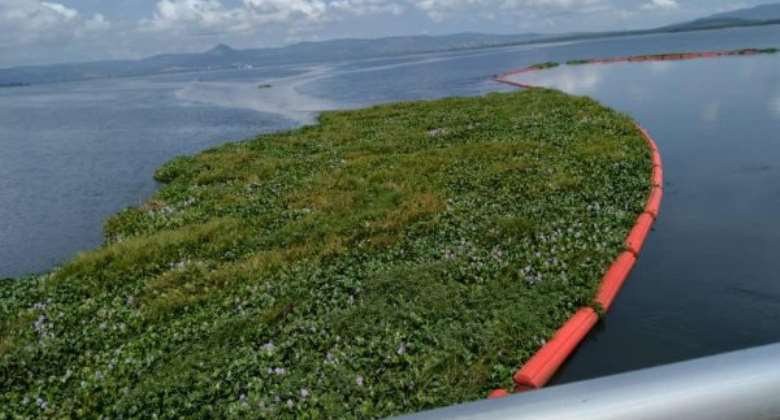 Even before getting the handful of fish, he spent close to half an hour meticulously sorting out aquatic weeds made up of water hyacinth locally called 'Wukli' and ceratophyllum also known as 'Hippo Grass' that has formed a mat on the surface of the lake.

The visibly frustrated middle-aged Stephen tells the GNA that relying on fishing as a source of livelihood is frustrating and unsustainable.

Dr Maxwell Billah, a Senior Lecturer at the Department of Animal Biology and Conservation Science, University of Ghana, explains that water hyacinth grows on surfaces of rivers, lakes, and other water bodies forming very thick layers and depriving other living organisms under the mats of sunlight, thereby reducing photosynthetic activities.

Their roots also take up a lot of oxygen from the water bodies, leading to the loss of biodiversity. The thick mats serve as breeding places of mosquitoes and other disease vectors such as water snails.

“Though the plant appears very beautiful and desirable, it has proven to be very problematic for socio-economic development,” Dr Billah said.

“They spread very fast. Two plants introduced in a water body can multiply to 7,140 square metres (76,900 sq ft; 1.76 acres; 0.714 ha) within three to six months. This is the equivalent of a standard FIFA professional football field.”

Stephen's situation is a representation of the stark reality many fresh water fishermen experience in the Eastern Region along the Volta Lake and at Jaway Wharf in the Jomoro Municipality of the Western Region. Many have laid down their tools as a result.

Those who had braved the odds like Mr Shelter Tortimeh, the Chairman of the Fishermen Association of Kpong near Tema, hints of retiring after 20 years in business, due to the recurrent infestation and failed weeds control attempts.

“The good old days are gone, We used to fish in all these areas but the weeds have taken over now. It is becoming difficult for us to take care of the bread and butter needs of our families, especially providing their educational needs. Many children have dropped out of school,” he said.

To complement the effort of the Volta River Authority, which generates, transmit and distribute the country's electricity, in clearing the weeds, the fishermen organise periodic communal labour but that had yielded no results as the weeds multiply in few days.

Then there are health issues too, Mr Tortimeh said, adding; “Apart from itching badly, one can contract skin rashes when the person comes in contact with the weeds. Many children have been diagnosed with bilharzia after swimming in the river.”

Madam Florence Ayiku, the leader of fishmongers in the community, said their businesses were on the verge of collapse due to low catch.

“In the past if I bought fish from the fishermen at GHS10.00, I would retail it for GHS12.00. Now five of the big sizes go for GHS100. Even with that we struggle before getting stock,” she said.

At the Kpong Water Head Pond of the VRA, Dr Michael Dade, the Public Health Manager, told the GNA that the aquatic weeds had covered a surface area, equivalent to 100 football fields, meaning a double water loss of the dam's reservoir and increased cost of operation.

The impact of climate change observed in Ghana, over the years, has made it impossible to predict the volume of rainfall aside its erratic nature.

Suffice it to say that the more than one-degree Celsius increase in temperature observed over the years in Ghana and the water hyacinth problem cause more evaporation of the water reservoir, which is favorable for the plant's growth.

Local and international studies (IPCC and Kabo-Bah et al., 2016) affirms that rainfall and temperature variability has a direct impact on electricity generation using an assessment of historical data from 22 stations from 1965 – 2014. It projects a further temperature rise in the coming years.

Often when the weeds break off and get into the turbans, it entangles it, and disrupts operations by reducing the efficiency of the turbines, Dr Dade said.

In extreme cases, they are forced to shut down the affected unit.

“A study conducted in 2019 by VRA reveals that a five-day shutdown resulted in the loss of about GHS 720,000. This is critical, especially when we need money to run our operations and electricity to serve customers,'' he said.

The Authority, over the years, had worked with the Environmental Protection Agency and other actors to adopt an integrated approach towards managing the weeds but they cannot be tamed.

It is also exploring a private sector partnership for some investment to harvest and turn the weeds into compost.

A visit to the second hotspot of the invasive weeds; the River Tano and Tano Lagoon, shows no difference as many fishermen had abandoned their cherished occupation and migrated in search of other works.

Mr Kwesi Nyameh, who used to fish at Jaway Wharf, told the GNA that more than 80 per cent of the fishers had relocated to the Central and Greater Accra regions in search of work.

The river, in the past, was very clean and the area was known as the source of the best tilapia in the country, he recalled.

“But not anymore. Now, there is no tilapia in the river again. If you chance upon tilapia then it probably would be coming from Cote d' Ivoire”.

“That is not all. In the past we used to drink from the river but not anymore. The only option is to keep sachet water in the canoe,” he said.

“I sold my canoe just two weeks ago. I cannot go to the side of Ivory Coast to fish because you could be killed or your fishing gears will be confiscated. Life is difficult now. I survive on loading goods into canoes.”

The Boat Owners Association is also feeling the pinch as the weeds make it difficult to convey passengers to the five island communities of Jaway Wharf, compelling them to halt their transport services.

“The weeds lock the canoe, entangle the outboard motor and stop it from working. In the past we used to travel to Elubo by canoe, but now it is not possible, because the weeds have covered the surface of the water,” Mr Emmanuel Adeapena, President of the Boat Owners Association, said.

EPA studies have revealed that water hyacinth, which originated from the Amazon Basin in South America, has massively infested the two biggest fresh water bodies in the country. It means less catch for fishermen.

Although the EPA is working with partners to use integrated methods to control the weeds, “the unwanted plants are still limiting services that people get from the ecosystem. But with substantial investment the problem can become a cash cow,” she said with optimism.

Organisations including Global Mamas, an NGO, are using the plant to weave baskets and other artifacts, but their efforts are a drop in the ocean per the rate of infestation described by experts.

GNA's checks revealed that Ghana, as well as other countries in Southern and Eastern Africa, are trailing in tackling the water hyacinth and related aquatic weeds as signed under the Sustainable Development Goals (SDGs).

Dr Billah warns that the affected water bodies can dry up if nothing is done to clear the weeds. The situation is compounded by dwindling rainfall, fueled by climate change and illegal mining.

And then, the aquatic plant gradually drives away organisms beneath the water, rendering the river unproductive, with the risk of shutting down one of the backbones of energy; the hydroelectric dam built more than 60 years ago.

The dangers are lurking, and we must no longer wait.