VIDEO: Assemblies of God pastor hooted and chased away by the congregation 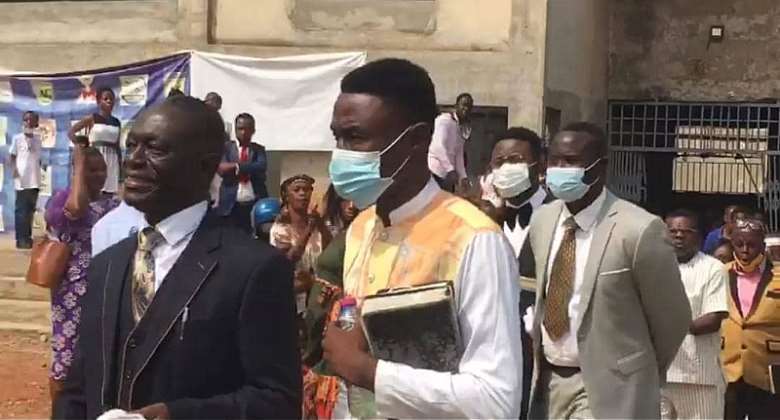 There was chaos at the Jesus Power Assembly at the Hilltop-Ohwimase Branch of Assemblies of God, Ghana after the Ashanti West Regional Superintendent of the Church, Rev. Stephen Yaw Manu delivered a sermon and later moved to effect a decision he had taken on certain leaders of the congregation yesterday.

The action of the church members, according to some of them was the anticlimax of a series of arbitrary decisions imposed on the congregation by Rev. Stephen Yaw Manu who is bent on running the church like his personal property.

In a letter sighted by MyNewsGh.com , the Ashanti West Regional Superintendent of the Assemblies of God, Ghana, Rev. Stephen Yaw Manu had on 9th December 2021 written to the Hilltop-Ohwimase Congregation, informing them of his decision to dismiss some “brethren” from the church.

“The following brethren on the church board of Jesus Power Assembly of Assemblies of God, Ghana at Hilltop, Ohwimase have been dismissed from Assemblies of God, Ghana with immediate effect. They are; Charles Addai, Godfred Kwarkye, Bismark Agyemang Siaw and Peter Owusu. Others are; Baffour Akoto, Collins Ofosu Kwarteng and Andrews Sarpong”, the letter mentioned.

The letter explained further that, “this has become necessary due to their gross insubordination and indiscipline towards the leadership of Kwadaso District and the Ashanti West Region in spite of several attempts to reason with them. They are also ineligible to worship with any local assembly of the church until further notice.”

After delivering his sermon yesterday, the regional superintendent reaffirmed the contents of the letter and moved to appoint new leaders for the congregation; he had also brought a new person to head the congregation since the pastor of the church is among those who fell to the ax in the letter of 9th December.

The distraught members who could not stomach the behavior of the Rev. Stephen Yaw Manu started shouting and tossing the chairs in the church auditorium around, before the regional superintendent, sensing danger for his life left the pulpit.

He was chased out by the congregation and warned never to step foot in the church.

The Ashanti West Regional Superintendent, Rev. Stephen Yaw Manu declined to comment on the matter when he was contacted by Mynewsgh.com.

Terrorism: Be quick to report any suspicious persons or pack...
5 minutes ago