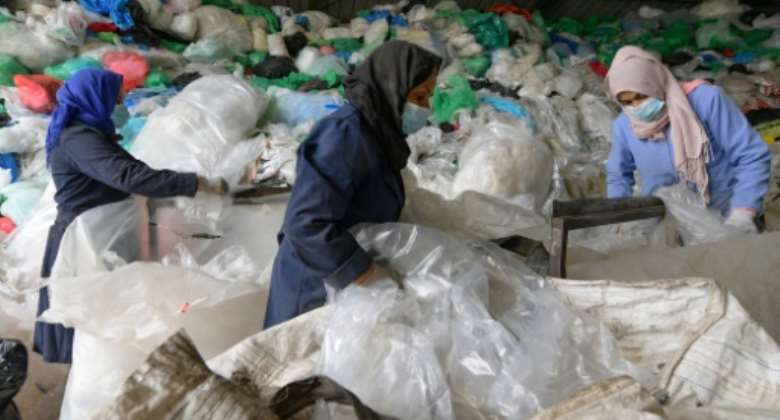 Employees sort through piles of plastic waste at African Recycling, one of the few recycling companies in Tunisia. By FETHI BELAID (AFP)

"When I see plastic, I see money," says Tarek Masmoudi, owner of one of the few recycling companies in Tunisia, where a waste crisis is threatening widespread social unrest.

Recycling is almost non-existent in the North African country, which produces 2.6 million tonnes of waste each year.

Some 85 percent of that ends up in landfills, while much of the rest winds up in informal dumps, says Tunisian waste management expert Walim Merdaci.

But with many facilities close to overflowing and neighbouring communities up in arms, the crisis is already stoking tensions.

An employee of African Recycling feeds plastic waste into a grinder -- much of the refuse is collected in the streets by informal waste pickers. By FETHI BELAID (AFP)

In November, a man died as security forces fired tear gas to disperse protesters demanding the closure of a stinking landfill they say has spread deadly diseases and health problems to their town of Agareb, near second city Sfax.

That could be a worrying sign of things to come as, according to expert Wassim Chaabane, most of the country's 11 official dumping grounds are due to close by the end of 2022.

That has authorities scrambling to find new sites.

In the capital Tunis, home to about 2.7 million people, the situation is particularly urgent.

The Bordj Chakir dump, Tunisia's biggest, receives more than 3,000 tonnes of rubbish a day and is close to overflowing.

From waste to wealth

But where others see a crisis, Masmoudi sees an opportunity.

Every day, a steady stream of minivans and small trucks bring to his facility in Mghira, near Tunis, bales of plastic waste to be weighed, sorted and cut into fine chips for industrial use.

Much is collected by hand from the streets and bins of the capital by "barbechas", informal waste pickers.

The fine chips of recycled plastic are used by industry. By FETHI BELAID (AFP)

The 42-year-old directly employs around 60 people, many of them women, and indirectly provides work to roughly 200 -- no small achievement in a country suffering 18 percent unemployment.

Between four and seven percent of Tunisia's waste is recycled, according to official figures.

But Masmoudi, standing by his sleek white four-wheel-drive, said the waste market was growing fast.

"Recycling is a sector where a lot remains to be done, but which could create jobs and wealth in Tunisia."

The situation is similar in neighbouring Algeria, where experts say as much as 60 percent of household waste from the country's 43 million population goes to unregulated dumps.

Just 5,000 people are employed in Algeria's recycling sector, according to official figures.

African Recycling directly employs around 60 people, many of them women, and indirectly provides work to roughly 200 -- no small achievement in a country with 18 percent unemployment. By FETHI BELAID (AFP)

In Tunisia, after a decade of political paralysis since a 2011 revolution, Masmoudi says the waste management system reflects a lack of strategy and vision.

Firms like his are blocked from collecting trash directly, as "municipalities own the rubbish", he says.

But implementing a system of sorting could take years, according to Chaabane.

"Tunisia's waste management system is hopeless at all levels, but especially when it comes to collection."

The national waste management agency recently admitted that it lacks the resources.

Running out of time

Merdaci, the other expert, says Tunisian authorities want to bring in a combination of mechanical and biological methods to treat waste, compacting and composting it whilst collecting methane, gas which can be used as fuel.

But initial projects will take two years to get off the ground.

"Time is running out," he says.

Merdaci called for "a tax to pay for waste management and to make everyone pay for what they produce" as a means for municipalities to deal with waste.

Each Tunisian produces on average 365 kilogrammes (804 pounds) of waste per year, yet taxpayers are charged no more than 28 cents for its management.

Chaabane says urgent solutions are needed, and adds that incineration was "the best option for cities" if clean energy is used.

But that option would not come cheaply, with incinerators costing some $280 million each.

To Merdaci, the outlook is grim.

"We've had 10 years of political instability, a decade without any decisions, problems with those living near dumps, and a lack of money. Success is nil."