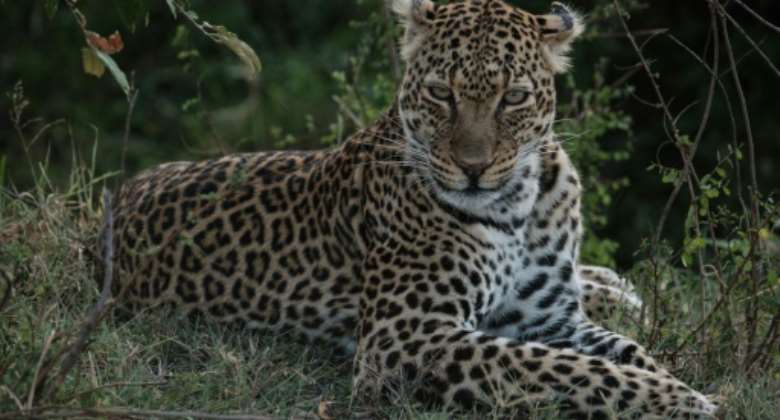 A leopard in Kenya's Masai Mara game reserve. While such cases of animals on the loose have increased in recent years, it is unusual for anyone to be injured during their outings. By Yasuyoshi CHIBA (AFP/File)

A leopard wandered into a house in southeastern Kenya after straying from its home in Tsavo National Park before rangers rescued it, a wildlife official told AFP Friday.

The animal is believed to have strayed from the expansive park on Thursday, entering the neighbouring town of Voi, 150 kilometres (90 miles) from the beachside city of Mombasa.

In a video shared online by local media outlet Daily Nation, rangers were seen carrying the tranquilised leopard -- its head covered by a cloth -- and loading it into a car, as an excited crowd tried to film the happening on their phones.

But a Kenya Wildlife Service spokeswoman downplayed the incident as a "normal" case of an animal straying outside the park.

"It wasn't a big deal. Happens all the time," Teresia Igiria told AFP, adding that no one was hurt.

While such cases of animals on the loose have increased in recent years, it is unusual for anyone to be injured during their outings.

A lion caused panic in July after straying from its habitat in Nairobi National Park into a crowded neighbourhood south of the Kenyan capital.

In February 2016, two lions spent a day wandering through Kibera, a densely packed Nairobi slum, before returning to the park, and days later more lions were spotted in town.

That park is just seven kilometres (four miles) from the heart of Nairobi, and incidents of animals escaping the grassy plains and wandering into the chaotic metropolis of more than four million are not uncommon.

But they occasionally take a tragic turn.

In December 2019, a lion mauled a man to death just outside the Nairobi park ringed by electric fencing, while in March 2016 another cat was shot dead after attacking and injuring a nearby resident.

The big cats are under growing pressure as one of Africa's fastest growing cities expands into ancient migration and hunting grounds.

Conservationists say lions lived in the area earlier and are neither escaping the park nor straying into human settlements, pointing out that people have instead moved into the lions' habitat.