Armed groups clash in south Libya week ahead of polls 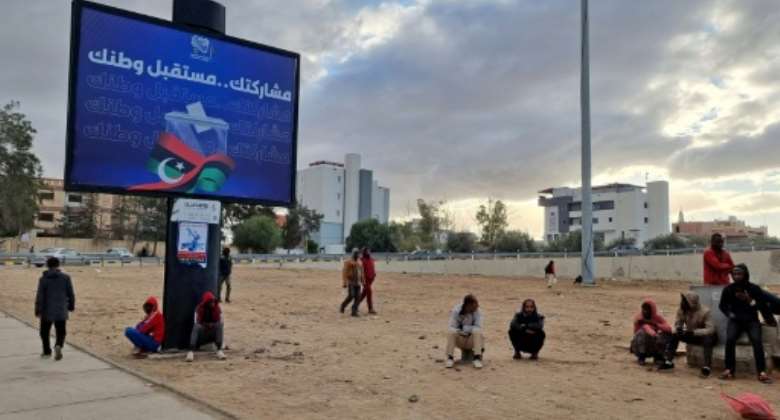 Workers sit near an electoral billboard reading in Arabic "your participation is the future of your country" in Libya's capital Tripoli. By Mahmud TURKIA (AFP)

The clashes come a week before the war-torn North African country is due to hold a presidential election that observers fear could trigger a return to conflict after a year-long ceasefire.

It identified the attackers as members of a group commanded by Mabruk Sahban and affiliated with Haftar, who is a candidate in the December 24 polls and whose forces control much of Libya's south.

The stolen vehicles had been sent to Sabha by the interior ministry in Tripoli to help secure the election, the police statement said.

Sahban's forces attacked a police convoy and forced officers to drive the vehicles to Brak airbase, south of Sebha, it added.

Sebha Medical Center said in a Facebook post that "last night due to events in the city we received two wounded people and one dead".

Local media said schools and public services were closed across the city Tuesday.

Haftar had in 2019 seized much of southern Libya including oil infrastructure, military sites and the southwestern city of Sebha, before launching a blistering assault on capital Tripoli, 650 kilometres (400 miles) to the north.

Western Libyan forces pushed him back to his eastern stronghold a year later, but he retained an armed presence in the south.

A ceasefire formally signed in October 2020 paved the way for a UN-led political process to bring in an interim unity government tasked with leading Libya until the elections -- in which Haftar is a candidate.

Libya has been attempting to extract itself from a decade of conflict since the 2011 revolt that toppled and killed dictator Moamer Kadhafi.