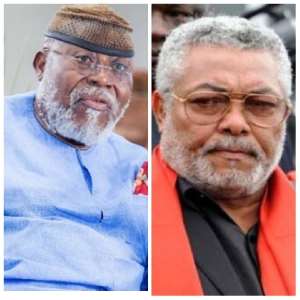 But for the late Captain Kojo Tsikata (rtd), President Jerry John Rawlings would have succeeded in engineering another coup in the dying embers of his civilian presidency, ex-military officer Dr Nyaho Nyaho-Tamakloe has revealed in an exclusive interview with Accra100.5FM’s morning show Ghana Yensom aired on Monday, 13 December 2021.

Eulogising the late National Security Advisor, who passed away about a month ago, Dr Nyaho-Tamakloe, who said the late Tsikata was his uncle, mentioned: “A lot of people just look at the negative side of Kojo” but added: “He’s got very positive sides [that] people don’t know [about] and one of the cardinal things that he did for this nation is that but for Kojo Tsikata, the fourth republic would have been derailed”.

Explaining what he meant by that, the founder member of the governing New Patriotic Party (NPP) said: “Now, when we had our elections in the year 2,000; that was the election between Atta Mills and Kufuor, a lot of you have no idea what happened”.

At a certain stage, he narrated, “when Jerry Rawlings noticed that he was losing power – losing power means he’s exiting [and] the NDC will not be in a position to win power at that particular time – what Rawlings did was that he got in touch with two commanders to move troops (and one of the commanders happened to be somebody I know very well; in fact, I’ve been in the same unit with him years back)".

He continued: “Now, the young man, who was then the commander, gathered courage and contacted his superior officer and the superior officer advised him that he should try and talk to Kojo Tsikata that this is what he has been told by the Head of State, Mr Jerry John Rawlings”.

“And the young man did just that and that saved the fourth republic”, Dr Nyaho-Tamakloe recounted.

The retired military and medical doctor told Iddrisu Awudu that: “Now, this got to the knowledge of President J.A. Kufuor; he’s aware of that but he didn’t probably know who really made that possible. It was Captain Kojo Tsikata”.

“So, when I say the man is a strategic thinker, this is one [of the examples]”, he demonstrated.

Dr Nyaho-Tamakloe also revealed that Mr Rawlings tried to puppet his successor but to no avail.

“Now, when J.A. Kufuor won the elections, as an experienced politician and on the advice of other statesmen in the country then, they tried to get him [Kufuor] closer to Rawlings because Rawlings had been in office for years … but later J.A. Kufuor realised that Rawlings was trying to dictate to him, so, he broke off and that was what saved this country”, Dr Nyaho-Tamakloe noted.

He added: “Now, those of you who are so young might have noticed that the relationship between Jerry John Rawlings and J.A Kufuor was not cordial. Rawlings kept on attacking him all the time and that is the reason; he [Kufuor] refused to listen to him [Rawlings] before he acts as a Head of State”.

We cannot continue to depend on loans for development; let’s...
55 minutes ago