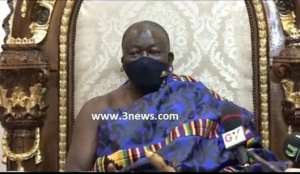 The Asantehene, Otumfou Osei Tutu II, has said taxation is necessity in developing every country's economy.

Commenting on recent impasse in Parliament over the proposed E-levy in the 2022 budget, the Asantehene advised the house not to frustrate government in its role of implementing policies.

He made the statement at Manhyia on Sunday December 12.

“It is to our good that our representatives in Parliament subject national budget to the most vigorous scrutiny and to call for changes. Government must always also have the humility to acknowledge and embrace useful inputs from all sources.

“But our representatives need to also bear in mind that it is not the role to either determine policy for the executive or to frustrate them from performing their legitimate duty,” he said.

The Minority had moved a motion to set aside the approval of the budget.

Their Leader, Haruna Iddrisu in moving a motion to overturn the approval said 137 lawmakers of the Majority could not have taken a decision.

He said they don't consider Deputy Speaker Joseph Osei Wusu (Joewise) who deliberated over proceedings yesterday, as Member of Parliament at the time he was sitting in as speaker hence that leaves the number present at 137.

His motion was supported by Bawku Central MP, Mahama Ayariga who pleaded with the First Deputy Speaker to set aside the approval.

However, in a sharp rebuttal, Damongo MP and Minister for Lands and Natural Resources, Samuel Abu Jinapor, quoting from the Constitution and the Standing Orders of Parliament defended and justified the approval of the budget.

“Mr Speaker, the approval of the budget was legal, it was appropriate, it was constitutional. You needed half of the members to take the decision and that decision is binding and standing,” Abu Jinapor said amidst cheers from his colleagues.

It is recalled that immediately after the approval of the budget on Tuesday, Haruna Iddrisu said that the Majority did not have the numbers to enable them approve the 2022 budget statement.

He said at a press conference in Parliament that as of the time the Majority were taking the decision to approve the budget, they were 137 and not 138.

“The precedent they are setting will haunt them in the future. At the time that they were taking the decision the house was not 137.”

They further rejected the assurance by the Finance Ken Ofori-Atta that their concerns in the 2022 budget would be addressed at the committee level.

Haruna Iddrisu said that they wanted their concerns captured in the original budget statement, not to be discussed at the committees' sittings.

“If you are acknowledging and admitting that there were concessions, let it reflect in the statement” and not a meeting at the committee level.

He further stated that the Minority will oppose to the E-levy proposal in its current any day and anytime.

“We don't support the E-levy in its current. Our point is to revise it to take care of the ordinary people.”

Warnock wins Georgia run-off against Walker to win the Senat...
45 minutes ago