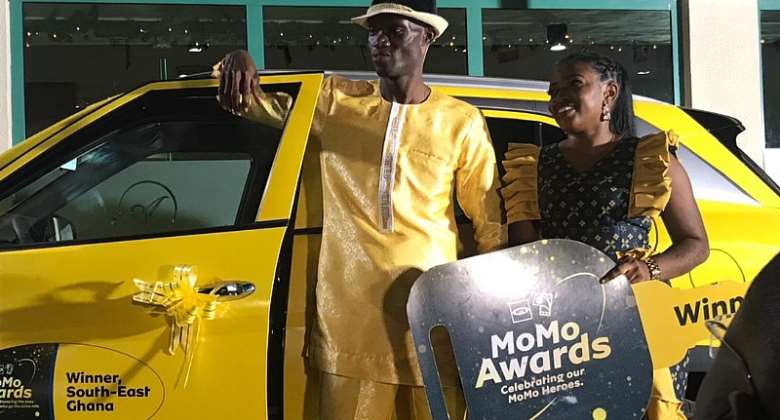 MTN Ghana on Saturday, December 11, 2021, dashed a brand new 2021 edition of Hyundai Creta SUV to the ultimate winner of its South-East District in this year’s Mobile Money (MoMo) awards.

The annual awards event is held in December every year by the giant telecommunications network to reward its mobile agents, mobile money merchants, and mobile money agents.

At an entertaining event held on Saturday night at the Alisa Hotel, as many as 400 MoMo partners made up of 200 Agents, 120 Merchants and 80 Mobile Agents in the South-East District Of MTN Ghana received enviable prizes for their hard work.

This is in addition to the about 600 hundred Agents and Merchants rewarded by MTN in Takoradi and Kumasi in the last few weeks.

Addressing the many agents and merchants gathered for the 2021 MoMo Awards, Mr. Eli Hini who is CEO of Mobile Money Limited applauded the winners while encouraging non-winners to continue working hard for next year.

“I would like to congratulate all the award winners and urge those who did not win this year to keep working harder since there is still an opportunity to be recognized next year, all other things being equal,” he said.

Mr. Eli Hini further called on MoMo agents and merchants to continue helping to fight Mobile Money fraud in the country by putting in the necessary efforts to complement steps already taken by MTN Ghana.

“We appreciate your role in helping us fight fraud and we urge you to keep up the good work to project a positive image for Mobile Money Limited and for that matter our mother brand MTN Ghana.

“We therefore we urge you to provide an exceptional experience for our customers and most importantly ensure your place of operation is well secured to avoid burglars,” Mr. Hini added.

At last night’s event, the ultimate winner for the South-East District, Isaac Bediako received a brand new Hyundai Creta SUV amid excitement and cheers from his colleagues in the MoMo business.

Speaking to the media after receiving the keys to his new car, elated Isaac Bediako credited his hard work for the recognition as he extended his appreciation to MTN Ghana for how through MoMo, they have transformed his life.

He said with his latest prize, he will be motivated to work even harder.

The service is offered by MTN in partnership with over 10 partner banks. You can use MTN Mobile Money to send and receive money, top-up MTN airtime, pay bills (DStv, ECG Postpaid, MTN Postpaid, School fees and more), buy & pay for insurance, pay employee salaries, pay for airline tickets and other goods and services.

Fight against MoMo Fraud:
In the wake of challenges relating to fraud, MTN Ghana has in the past year initiated several steps to fight the canker.

In April, MTN implemented the ID presentation for cash-out service. Even though there were some hiccups at the start leading to some agents being sanctioned, it was largely successful.

Also, this year, MTN took the fight against fraud to another level in collaboration with the relevant stakeholders to block the IMEI’s of phones used in undertaking fraud.

Customers are urged to report suspected fraudsters by calling, 114, sending a text to 1515 or 419, or sending an email to: [email protected]