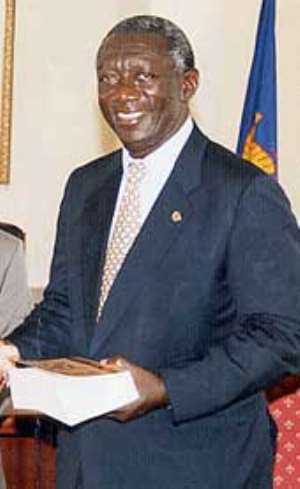 Konongo and Kofoku both happen to be towns in the region where our president, John Agyekum Kufuor was born, but this article has nothing to do with that. Let me begin by defining the keywords in the subject line. These definitions were taken from the Ghanaian dictionary at the ghanaweb.com website. Konongo Kaya: Someone who does not belong to a place, or can't perform a particular task yet won't yield to someone who can. Similar to the proverbial "dog in the manger", which does not belong there, but won't let the sheep, which belongs there, occupy it. Kokofu Football: Soccer game in which one passes the ball only to his brother/friend/relative; Nepotism Prior to becoming President kufuor proved beyond reasonable doubt that he was inept and hypocritical. Here is the proof His tenure as the chairman of Asante kotoko football club recorded the worst performance of the Fabulous Team in its history since it was formed in 1936! Kufuor could not manage a simple brick factory and sent it into bankruptcy Kufuor condemns the excesses of the June 4 revolution, but took up an appointment with the same coup plotters, after a coup against an elected govt2. He was dismissed for incompetence. Kufuor was a qualified lawyer without a chamber (nor any publication to his name) Despite his proven failures, the people of Ghana were so fed up with the corrupt practices of the previous NDC administration; they had very little choice but to vote the best of two evils. Konongo Kaya Kufuor started his term of office with unproductive an extravagant trips. Those trips he made indicate his ignorance. Do you know the factors investors consider before throwing finances onto this African continent? One of them is a precedence of stability for previous investors. Now, out of his own political motives and intimidations, he threw out a Malaysian Telecom company that made Ghana the most boastful country in the area of telecoms, only to be sued and start negotiating for out of court resettlement. This shows a quality of incompetence. Corruption has ballooned and the Kufuor government lacks the will to investigate allegations of corruption against its officials. Examples: Sahara oil agreement, Police vehicles purchase, the Illegal appropriation of ¢150 billion from Castle renovation project, C431 million donated for renovation of President’s private residence, misappropriation of the stadium disaster fund, etc have all been brushed aside. Incompetence of the government was shown in all spheres of life. Examples: Privatization of GCB and water, (or private participation, as the case may be) , Aborted procurement of a loan from a “non-existent” International Financial Consortium (IFC), Handling of Ya Na’s death, Ghana telecom-Telenor Deal, Politization of the National Reconciliation Commission, Inability to create jobs etc Public euphoria that greeted the election victory has been replaced by anxiety over the new government's ability to deliver on its election campaign promises. The much-exploited spin of blaming everything on the NDC does not appear to wash anymore with the public. The Ghanaian public has become more discerning and is able to see beyond spin and propaganda. Kokofu Football According to the upcoming Guinness book of world records, President Kufuor is the head of state with the highest number of “close” relatives in Government (Sadam Hussein’s ouster put Kufuor on top). In this golden age of family government, NPP has a zero tolerance for other families and the list below proves it. Relatives of the President in Govt Dr. Ado Kufuor Brother Minister of Defence George Kufuor Brother Member of University Council Dr. A. A. Osei, Nephew, Deputy minister for Finance & Economic Planning Janet Acheampong, Niece, CEO of Inland Revenue Services Mr. J.H. Mensah, Brother-In-Law, Senior Minister Veronica Kufuor, Niece, Ambassador to Netherlands Owusu-Mensah , Nephew, GPHA Boss, Mr. Baah Wiredu Nephew Minister of Education, Youth & Sports Mr. Kan Dapaah “Nephew” Minister of Communications and Technology Peter Osei Duah Nephew, Managing director of SIC Mr. Osei Kwaku, Cousin, Dep. Min. Presidential Affairs. Mr. D.K. Osei, Brother-in-law, Special Asst. to The President. Dr. Osei Akoto, Brother-in-law, Special Asst. to Minister of Finance Ben Koufie, in-Law, GFA Chairman Wereko-Brobbey: The VRA boss got his position because his uncle victor owusu fed and clothed the president when he returned from the UK in the 60's
90% of those mentioned above have proved to be incompetent, but all the president has done is move them to new positions. Management of Tema Oil Refinery (TOR) has been replaced by Kufuor Klan members, visiting dignities are forced to make a call on the Ashantehene, Govt loans are given to chiefs, belonging to Kufuor’s ethnic group, to disperse, etc These are a few example of how the president and his cronies operate. The president has refused to probe his family members and those of his ministers. Examples: Ofori-Attah's Obotan real estate deal; Wereko-Brobbey's VRA; Mamponghene's wife - who stole billions of Cedis from the Kumasi branch of Bank of Ghana, etc Conclusion President Kufuor has proven to be a “Konongo Kaya”, because he is not up to the task, but he still wants another 4 more years. He is playing Kokofu football, because he has made sure all his relatives (competent & incompetent) get government positions Perhaps the president knows so little about how much Ghanaians are suffering, because of his unhappy knack of always being “on holiday” (he calls them travelling to look for investments) when things get sticky. And when the dust finally settles on the 2004 elections, he might find himself on another holiday -- a permanent one As a fellow Ghanaian rightly said: Kufuor is the cross Ghana has to bear, the price we have to pay for democracy. The tragedy would be if he is re-elected in 2004 Footnote: writer made correction on September 2 10:40 GMT 1 - was: $43 million in original article 2- was: Kufuor condemns the excesses of the June 4 revolution, but took up an appointment with that government. Views expressed by the author(s) do not necessarily reflect those of GhanaHomePage.