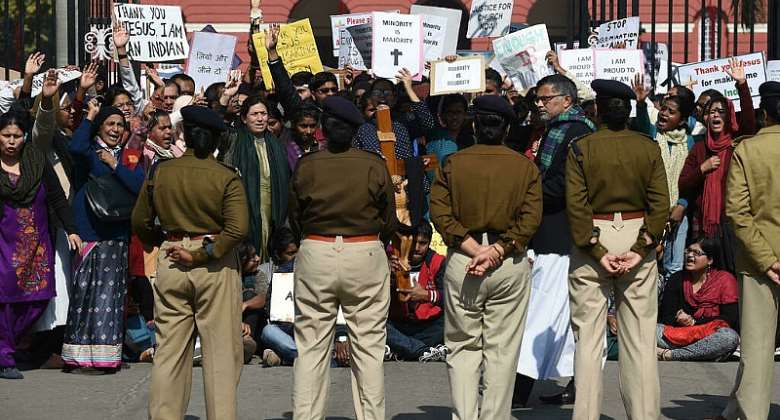 A recent spate of attacks on Christians, their schools and places of worship in India has the community concerned ahead of Christmas.

On Thursday, members of several right-wing organisations tried to force their way into a church in the Rohtak district of northern Haryana and were eventually stopped by the police. The crowd alleged that the church was carrying out religious conversions.

Earlier this week, a Catholic school in central Madhya Pradesh state was vandalised by a mob of some 500 Hindu extremists, despite school authorities requesting police protection prior to the attack.

The mob was armed with iron rods and stones, and chanted 'Jai Shri Ram' (Hail to Lord Ram) while damaging school property.

“It is part of a conspiracy to target the Christian community and discredit their charitable services including in the field of education”, said Father Maria Stephen, the Public Relations Officer for the Catholic Church in Madhya Pradesh.

The latest incidents are not sporadic as many parts of the country, especially states governed by the ruling Hindu Bharatiya Janata Party (BJP), have seen an increasing number of hate crimes and attacks against minorities such as Christians in recent months.

A report released by the joint initiative of the United Christians Forum, Association for Protection of Civil Rights, and United Against Hate revealed that at least 305 incidents of violence against Christians took place within the first nine months of this year.

Uttar Pradesh recorded the highest with 66 cases, followed by Chhattisgarh (47) and Karnataka (32).

The attacks have coincided with renewed attention on a longstanding claim from right-wing Hindu groups: that a string of forced conversions is taking place in states. This claim has been vehemently denied.

Leaders of the community are worried as incidents of mob violence against Christians have steadily increased under the Hindu nationalist government of Narendra Modi.

“This looks like an attempt to polarise the atmosphere. Attacking highly visible targets like churches and educational institutions is a way to seek attention,” Father Pius Malekandathil, a historian, told RFI.

“It really hurts me to see that such misguided people are targeting Christians. They must learn the language of love because such acts will not get them anywhere,” Father Edward Sacrawat of the Don Bosco orphanage told RFI.

“It pains my heart. I am not even asking which religion we belong to. But are we human beings?”

Why are Christians being targeted?

In some states, Christian churches have been vandalised, while in others pastors have been beaten or abused. Congregations have been broken up by mobs and believers hospitalised with injuries.

In some cases, state authorities have recently ordered that churches undergo a "survey" to check for "forced conversions" and deployed intelligence officers to gather more information on them.

At least nine Indian states ruled by the BJP have planned anti-conversion laws. Under the Unlawful Conversion of Religion Ordinance, 2020, which was passed in Uttar Pradesh, unlawful religious conversions are prohibited and marriages are nullified if they are carried out with the sole purpose of religious conversion.

The law provides for imprisonment of up to 10 years and a maximum fine of €585 (Indian Rupees 50,000) under different categories.

The attacks are occuring, despite a clause in the country's constitution that guarantees the freedom to openly practice any religion.

Christianity is the third largest religion in India after Hinduism and Islam, with over 32 million followers constituting over 2.4 per cent of the country's 1.3 billion plus population.