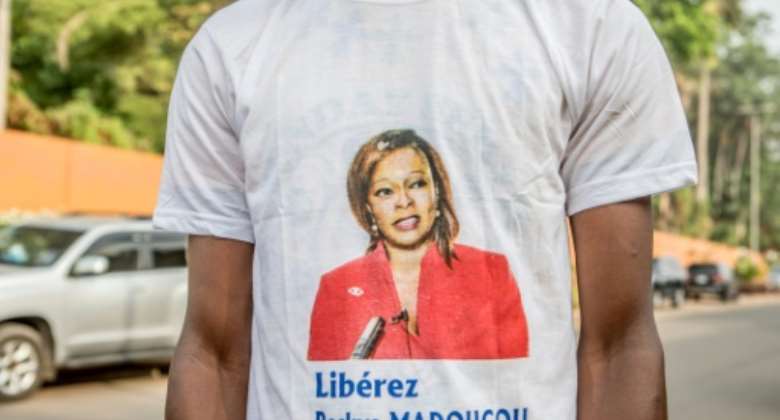 Supporters of Reckya Madougou gather outside the court in Porto-Novo. By Yanick Folly (AFP)

Benin opposition leader Reckya Madougou was sentenced on Saturday to 20 years in prison for terrorism by a special court in the capital Porto-Novo after a brief trial that her lawyers condemned as a "political attack".

After more than 20 hours of hearings, Madougou was found guilty of "complicity in terrorist acts" by the Economic Crime and Terrorism Court, or Criet, which on Tuesday sentenced another key opposition figure to 10 years.

Critics say the court, set up in 2016, has been used by President Patrice Talon's regime to crack down on the opposition and pushed Benin into authoritarianism.

"This court has deliberately decided to penalise an innocent person," Madougou said shortly before her prison sentence was announced.

"I have never been and I will never be a terrorist," the 47-year-old former justice minister added.

"It's a sad day for our justice system, I maintain that there is no proof," one of her lawyers, Robert Dossou, told AFP.

Madougou was one of several Benin opposition leaders banned from running in an election in April in which Talon won a second term with 86 percent of the vote.

Madougou, left, seen here when she was a government minister, was sentenced to 20 years in prison. By FIACRE VIDJINGNINOU (AFP/File)

She was arrested in the economic capital Cotonou in March -- just weeks before the election -- accused of financing an operation to assassinate political figures to prevent the vote, in an alleged bid to "destabilise" the country.

"Tried at 6am, without witnesses, without documents, without evidence, Recky Madougou was sentenced to 20 years in prison by three accomplices of those in power," her France-based lawyer Antoine Vey tweeted after the sentencing.

"Her crime: to have embodied a democratic alternative to the regime of Patrice Talon."

Vey had told the trial on Friday that "this procedure is nothing but a political attack".

"Even before her arrest, everything was orchestrated," Vey said a day after arriving from Paris.

He asked for the trial to be cancelled, before leaving the court and never returning -- Madougou's Benin-based lawyers stayed for the remainder.

Vey then told AFP that it was "a trial in which nothing was judicial".

Madougou said on the stand at the trial that she had "no illusions" about its outcome.

"I offer myself to the democracy of my country, if my sacrifice can give your court back its independence," she said.

Less than a week before the April election, a judge from the special court fled Benin denouncing political pressure to make rulings, in particular in the case of Madougou's arrest.

A Madougou supporter outside the CRIET court in Porto-Novo, as security forces look on. By Yanick Folly (AFP)

Benin was long praised for its thriving multi-party democracy in a troubled region. But critics say the West African state's democracy has steadily eroded under Talon, a 63-year-old cotton magnate first elected in 2016.

Some opposition leaders have fled the country while others were disqualified from running in elections, or targeted for investigation.

Joel Aivo, a professor who had been held for eight months, was found guilty on Tuesday of plotting against the state and money laundering.

Aivo, who was also barred from running in the election, was arrested on April 15, four days after the ballot that saw Talon returned to power.

The same special court in 2018 also sentenced Sebastien Ajavon, an opposition figure who came third in the previous election, to 20 years in prison for drug trafficking.

He was again sentenced in early March in absentia to a second sentence of five years in prison for forgery and fraud.

Like most Beninese opposition figures, he now lives in exile.