Africa, the land that hated her own 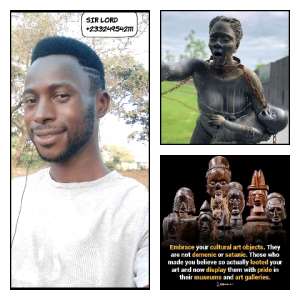 When the colonial master came to our shores with the cross and the crescent, they still saw interest in our artefacts.

They stole and sneaked out many of our antiquities into their museums crossing many seas.

Their people pay hefty sums to see such African creativity. Even our own rich African politicians join this sightseeing in their many travels to their world.

Yet, the land from which such artefacts were born we've been managed to hate our own and brand it evil and demonic.

Some so called pastors are burning African creativity in the name of exorcism.

Not long ago a story went viral of a young girl whose talisman that protected her in playing football games was burnt in the name of "freeing her from evilness."

And Africa has lost it through gaslighting.

I am a Christian, don't get me wrong with what will follow:

Is talisman different from the risen crucifix, rosary, statue of the Mother Mary . ..and other Christian paraphernalia won by the faithfuls?

So why should the whole world know that a Ghanaian girl wear amulet for protection?

In one of the world football competitions not long ago, I can't readily recall, Lionel Messi attested been given some beads for luck by a young fan, and he scored a goal to break his goal drought in that outing for his national team, Argentina.

It's public knowledge too that the Brazilian star Kaka used to be keeping a biblical text in his pants during games.

And the Christians do the Cross sign after scoring a goal, whilst Muslims put their forehead on the ground in a prayer position if they scored a goal.

So Africa's is evil that deserves fire, right?

_*Africa our problem is our education*_

Dr. Kwame Nkrumah mentioned this in his Dark Days in Ghana, after his ouster, and subsequent exile in Conakry, Guinea.

The first president of Ghana and the PanAfricanist icon feared for the future of the continent he so loved that has been forced to hate her own and gladly loved that of others.

If for anything better at all, imported religious practice should augment, not to wipe out our heritage. We adopt and adapt to broaden our horizon, not to denounce our beautiful African culture.

If we claim to be out of the woods of colonialism, then like it was sung by the legendary Bob Marley, "we've got to emancipate ourselves from mental slavery."

Stop the lies – Angry constituents descend on Akropong MP Do...
2 hours ago