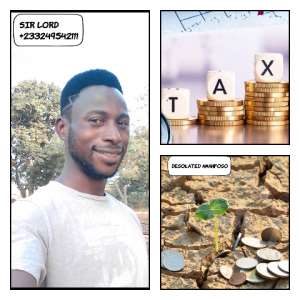 May the good heavens shield our Republic of Ghana from a bleak future of tax politics that plagued the ancient city state of Amanfoso in the land of Bono as narrated in the following.

Goka had an ally in affluent old Amanfoso. A walled city state that beautified the surface of this earth at the height of its glory.

By size in land mass, Amanfoso was smaller than a hundredth of today's England's capital London.

To it's lacking too was what today's Ghana's capital Accra is bequeathed with in abundance, access to sea and teeming human capital.

Amanfoso was landlocked and less populous with a population not more than ten thousand.

Demographically, if Amanfoso was to maintain its existence today, it was to be located in the Jaman North District of Ghana's Bono Region, under the Suma State stool, sandwiched between Goka and Asuokor, off the Seikwa road.

Amanfoso as Goka was, was monarchical, and documented embassies exchanged between the two allied traditional enclaves are still kept pristine in the knowledge vault of the Suma State, available for viewing during the annual Suma Akwantukɛseɛ (festival).

At the reign of Nana Nkron, Amanfoso had merchants with fleets of merchandise in all trading entrepôts or big markets around the known world.

They bought and sold for profit, produced and enhanced production for high returns.

The Amanfoso people were civil and patriotic, they paid the exact tax exacted on them by Nana Nkron's Sanaahene or exchequer, one the today's generation will call finance minister.

Nana Nkron kept his side of the bargain, and from the tax proceeds, Amanfoso was built enviously beautifully as a heavenly verdant garden in the midst of an arid Sahara desert.

All comers to Amanfoso got their mouths agape in wonder of a street that had golden pavements, emerald artefacts, and gilded palaces.

Women and children were in fine clothing, and horses chauffeured the nobility - princes and princesses sat in chariots.

Nightly balls were highly patronised with pomp and pageantry.

The glamorous position of Nana Nkron then came under contention by two rival clans, the liberal Ndɔ Clan and the conservative Npɔ Clan.

The two clans challenged Nana Nkron to denounce the monarchical rule of Amanfoso, and the dynasty was curtailed in lieu of democracy.

Peaceful in nature, Nana Nkron abdicated his position and embarked on self imposed exile in a far away land. Later it was reported that he returned to live in Amanfoso under the guise of a private gentleman, responding to the name _Atetɛ_ or Observant.

Alternating between them, now the Ndɔ Clan and the Npɔ Clan took the position of the supposed exiled Nana Nkron, and every decade or less it seemed, one clan transferred power to the other through universal adult suffrage.

The new order too did not cease taxation, they sought every available means to impose hefty taxes on the people.

They taxed income, heirloom of seed, one's patrimony or matrimony.

Though suffocating it was, yet the civility of the people meant they paid what due them, and in return expected usefulness in their taxes.

This time the tax basket was widened, yet the infrastructure projects attributed to it were minimal.

Still the Amanfoso people remained bonded to their leaders and paid imposed taxes.

Then the plateau of Amanfoso and its decline came fast.

Sore losers they turned (euphemistically describing it), the Ndɔ Clan rallied their followers not to heed to the tax plans of the Npɔ Clan's Sanaahene.

They never paid their taxes anymore, and amongst nonpartisan Clan members too, the Ndɔ Clan cause disaffection for the Npɔ Clan, and they too never rendered their tax obligations.

It didn't take long, the sources of income to run the Amanfoso state was drought, with its direct reflection on the wholesome water that was channelled through the pipes drying fast.

The streets were littered with festering garbage, the unpaid cleaners vacated their positions. Security of the people were left to their own hands, for the unpaid guards left their posts, attacks on human lives were rife.

The inns had the physicians laid down their tools, so did the tutors at the educational centres, so patients and learners respectively were left stranded.

Visitors to Amanfoso saw there no more accommodating, and they left its walls gladly unceremoniously. The indigenes soon after followed suit with tears leaving behind such relics of beauty.

Within months of this tax resistance, Amanfoso entered into anarchy, rule of law gave way to the rule of brutality, Clans splintered into armed rebellious vigilantes, racing to scrape the last flesh on the bone of the state's coffers.

Those who couldn't stand the hardships sought refuge in other states, with some of this fleeing exodus still having their family lineage domiciled in Goka.

Nana Nkron who was by this time observing all happenings under the guise of _Atetɛ_ owned up, revealing himself out of pains for the near collapse of something beautiful he built to the envy of the world.

He stood in the streets of Amanfoso, lamented for its glorious past, blaming the two rival Clans for their entrenched positions taken, not ready to compromise on the taxation laws, and he cursed the blessed city to lose its name and fame.

His pronouncements were like sulphur and brimstone, a force majeure it was, setting ablaze every standing breathing and non-breathing object in Amanfoso, and razed it into ashes, overwhelming the bounds of the fireman's strength.

Nana Nkron was accepted in his old age at a moderate palace in his ally Goka with a retinue of family members and servants.

If you enter Goka today and learn of the surname Nkronmma, they're the descendants of Nana Nkron.

In a span of few decades, the beautiful Amanfoso moved from grace to grass, desolate, caused by tax politics, serving as a deterrent and a detestable blueprint to all democracies in the world.

Today, the Bono people pass by the desolated walls of ancient Amanfoso and be reminded of the genius and crafty forebears.

The channel we used was the same channel Joy FM used to get ...
31 minutes ago