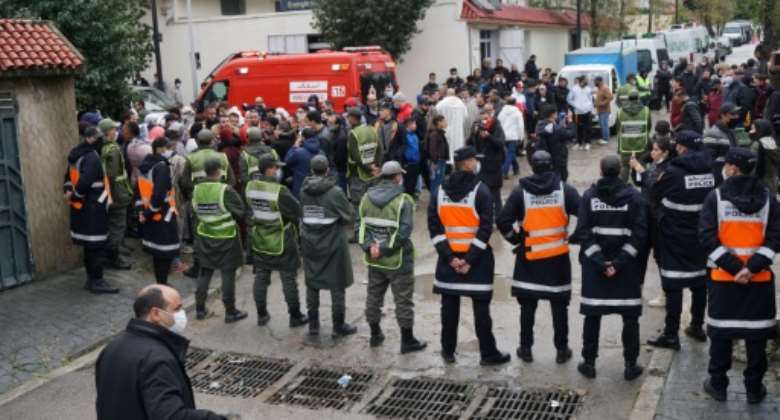 Emergency services gather at the site of a basement textile workshop that flooded after heavy rain in the Moroccan city of Tangiers on February 8, killing 29 employees. By - (AFP)

The owner of a Moroccan textiles workshop where 29 workers drowned, most of them women, in a flood in February was sentenced to 18 months in prison, a lawyer said Thursday.

The workers were trapped as heavy rains flooded the basement factory in the northern city of Tangiers, in a country where many scrape a living from informal jobs in unsafe workplaces.

Relatives voiced anger over the sentence.

"The families of the victims are not satisfied with this verdict. They insist that local authorities who authorised the workshop were responsible," said Zineb Issayeh, a member of a support group for the families.

They plan to appeal, she said.

Main defendant Adil El Balili was sentenced to 18 months in prison and a fine of $107 for "involuntary homicide" after a months-long trial, the plaintiffs' lawyer Abdelmounaim Rifai told AFP.

The city's water and electricity firm Amendis, a subsidiary of French giant Veolia, was ordered to pay $21,000 in damages.

The authorities had initially said the Tangiers workshop was illegal, but later recognised that it had been licensed.

Over half of Morocco's textile and leather production comes from unregulated operations, according to the country's employers' association, which says many fail to meet safety standards.

Thousands of families in the North African city of Tangiers depend on such factories which supply major international labels.

Mozambican President to address Ghana's Parliament May 25
33 minutes ago