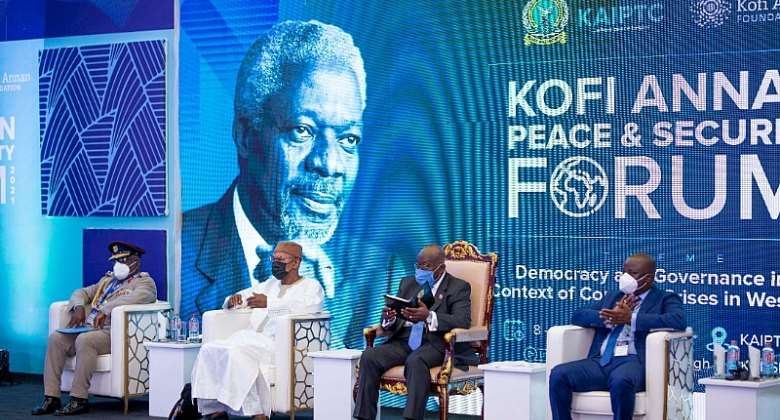 The Kofi Annan International Peacekeeping Training Centre (KAIPTC) in partnership with the Kofi Annan Foundation in Geneva has successfully held the 2 nd edition of the Kofi Annan Peace and Security Forum (KAPS Forum) in Accra, Ghana.

The two institutions put together the 2021 KAPS Forum based on their shared commitment to the values of the late Mr. Kofi Annan, whose understanding of peace was founded on a holistic vision of societies based on good governance, democracy, and human rights, especially in Africa.

Delivering an address on day one of the Forum on Wednesday, December 8, 2021, Major General Francis Ofori, the Commandant of KAIPTC said there cannot be a more opportune time to discuss democracy and governance in West Africa than now, considering the developments in the Sub- Region in particular, and Africa in general.

He said the state of democracy globally points to a democratic backsliding characterized by a sustained and deliberate process of subversion of basic democratic tenets by some political actors and governments.

“..it is worrying that despite efforts by Africa’s Regional Economic Communities (RECs) and the international community at institutionalizing democratic governance, the continent is currently experiencing a democratic reversal with increasing patterns of, as well as endeavors at, evading fixed term limits.

“The decline in democracy is manifested by a clampdown on civil liberties in such instances which pose a threat to the stability and security of the region. The recent successive coups d’état in Mali and Guinea, among others, are all indicative of the decline of the state of democracy in the region,” the KAIPTC Commandant shared.

Indicating that this has all the potential to become a different kind of pandemic that threatens to afflict very large and influential democracies that account for a quarter of the world’s population, Major General Francis Ofori called on leaders to tackle the issues.

According to the KAIPTC Commandant, if the situation is not confronted with the seriousness it deserves, it can embolden some political systems to intensify their practices and engage in ever more brazen attempts to distort the workings of democracies.

On his part, Chairman of the Kofi Annan Foundation, El Hadj As Sy paid tribute to the former UN Secretary-General while stressing that he knew there could be no lasting peace without democracy, both domestically and internationally, which is why he worked tirelessly to promote and support democracy, first at the helm of the United Nations and later through his Foundation.

He said from events over the past few years, and particularly the coups in Mali and Guinea, the democratic gains of yesterday are in jeopardy today.

“What this means, ladies and gentlemen; is that if we do not shore up the democratic legitimacy of our political systems by ensuring the integrity of elections, the respect of fundamental human rights and freedoms, the political, but also economic and social inclusion of disenfranchised groups in our societies, particularly women and youth, West Africa will face growing unrest and violence in the years to come,” El Hadj As Sy said at the KAPS Forum.

The Chairman of the Kofi Annan Foundation in applauding President Akufo-Addo for gracing the Conference commended the ECOWAS Chair for calling for a revision of the landmark Protocol on Democracy to include term limits and constitutional protections.

“As the leader of one of Africa’s leading democratic success stories, and an eloquent advocate, democracy in West Africa could not have hoped for a better champion,” he noted.

El Hadj As Sy further charged the hundreds of experts, stakeholders, and political actors taking part in the 2nd KAPS Forum to work together to come up with solutions to West Africa’s democratic crisis.

The Forum brings together over two hundred delegates including former African Heads of State and high-level diplomats from governmental and intergovernmental organizations, including Kofi Annan Foundation Chair of the Board Elhajd As Sy.

The first edition of the Forum was successfully hosted in 2019 but the 2020 edition had to be canceled due to the major impact of the Coronavirus (Covid-19) pandemic.