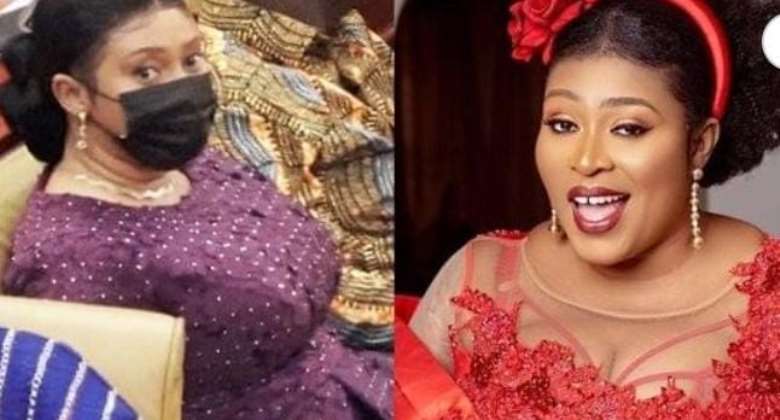 Deputy Chief Executive Officer of Microfinance and Small Loan Centre (MASLOC), Afia Akoto is demanding retraction and apology from Class Media Group, owners of Accra Fm within 48 hours for some statements made by one Baah Achemfuo, a panelist on a political show on the station.

Afia Akoto issued the strong warning to Class Media over comment made by the panellist about her impersonating the Member of Parliament (MP) for Dome-Kwabenya, Sarah Adwoa Safo on Tuesday, November 30, 2021.

Lawyer Sarah Adwoa Safo became a topical issue in the country as some members of the Minority denied her presence in Parliament during voting on the 2022 budget statement of the Government.

Members of the Majority side had met on the day in relation to the budget after the Minority rejected it on Friday, November 26.

The Majority approved the budget with their numbers, but, following their decision, were claims that somebody else had voted in the stead of the Dome-Kwabenya MP.

The Minority claimed the said Adwoa Safo was an impersonator.

Some couple of days after the Majority had approved the budget and was being discussed on Accra Fm, Baah Achemfuo during a panel discussion stated that he had information about the said impersonator, naming Afia Akoto.

Shockingly, he claimed the impersonator is Afia Akoto, stating emphatically that ”Afia Akoto can do anything to save NPP and Akufo-Addo…If Afia has to cut her leg for the NPP to remain in power, she will do it”.

The Deputy CEO of MASLOC became mad of the remarks and immediately instructed his lawyers to deal with the matter.

In a statement in possession of DGN Online from the solicitors for Afia Akoto, Marfo & Associates to Class Media stated that the statements by Baah Achemfuo have ”exposed our client to public ridicule, verbal attacks and threats through anonymous phone calls” and are ”instructed to demand an immediate apology and a retraction of the statement attributed to our client within 48 hours upon receipt of this letter in the same prominence that you gave your earlier publication”.

”Please be informed that if you fail to retract and apologise to our Client within 48 hours upon receipt of this letter, we shall proceed with appropriate legal processes to vindicate our client’s rights without any further recourse to you.”