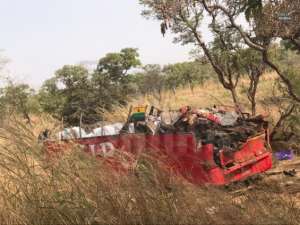 Police in the Savannah Region suspects that the driver of the VVIP bus that had an accident on Wednesday, December 8 was sleeping and lost control of the wheel.

As was reported by Modernghana News yesterday, the ghastly accident resulted in the death of as many as nine passengers while several others ended up in the hospital after sustaining various degrees of injuries.

According to Inspector Agyekum Owusu who is the Savannah Regional Police Public Relations Officer, they suspect that the driver was sleeping behind the wheel.

“Those who survived are responding and the dead conveyed to Wa Regional Hospital pending identification”.

“9 confirmed dead and our preliminary investigations indicate the driver might have been sleeping and that caused the accident,” Inspector Agyekum Owusu told 3FM in an interview.

He added, “There was not any dislocation on the car…he just veered off the road. The driver was carrying 45 passengers from Accra…but from Techiman to Bole, majority alighted, leaving 18.

“At the time the accident happened, he was carrying 18 passengers. The driver is among the injured.”

According to Inspector Agyekum Owusu, the driver who is responding to treatment at the hospital will be charged with causing harm and dangerous driving when he is discharged.

“We are waiting for him to come out from the hospital and then if there are any questions to be asked.

“He will be charged. We will charge him with negligently causing harm, dangerous driving, careless and inconsiderate driving, among others,” Savannah Regional Police PRO shared.