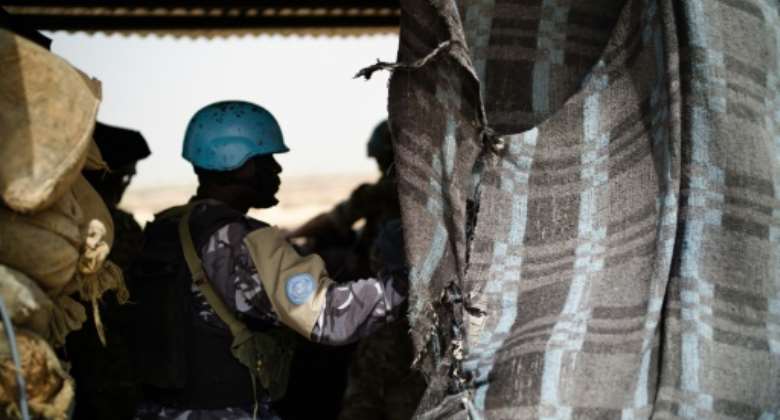 The MINUSMA mission in Mali is one of the biggest -- and most dangerous -- UN peacekeeping operations in the world. By FLORENT VERGNES (AFP/File)

"The initial toll is seven dead and three seriously injured," it said on Twitter.

The incident happened in the Bandiagara area in the Mopti region, as the convoy was heading to Sevare from Douentza, it said.

The casualties were members from the Togo contingent of MINUSMA.

He called on the Malian authorities to do their utmost to identify those responsible and bring them to justice.

MINUSMA chief El-Ghassim Wane lashed what he called a "cowardly" attack, noting that it added to the already heavy toll paid by the UN's mission in Mali.

The act "may constitute a war crime," he said in a statement.

On Monday, a MINUSMA soldier died from injuries inflicted by a roadside bomb near the northern town of Tessalet on November 22.

He had been rushed for treatment to the Senegalese capital of Dakar with two other injured troops.

The blast happened while the convoy was travelling on the road from Douentza to Sevare. By ElÃ©onore HUGHES (AFP)

Mali is the epicentre of a jihadist insurgency that began in the north of the country in 2012 and spread three years later to neighbouring Niger and Burkina Faso.

Thousands of people across the region have died, and around two million have been displaced.

Attacks have been carried out by militants affiliated to Al-Qaeda or the Islamic State group, but many civilian casualties have also been caused by so-called self-defence forces.

MINUSMA -- the United Nations Multidimensional Integrated Stabilisation Mission in Mali -- began its deployment to the troubled Sahel state in 2013.

The UN says the mission has suffered the most fatalities of any of its peacekeeping operations in the world, with hostile acts causing 146 deaths as of October 31.