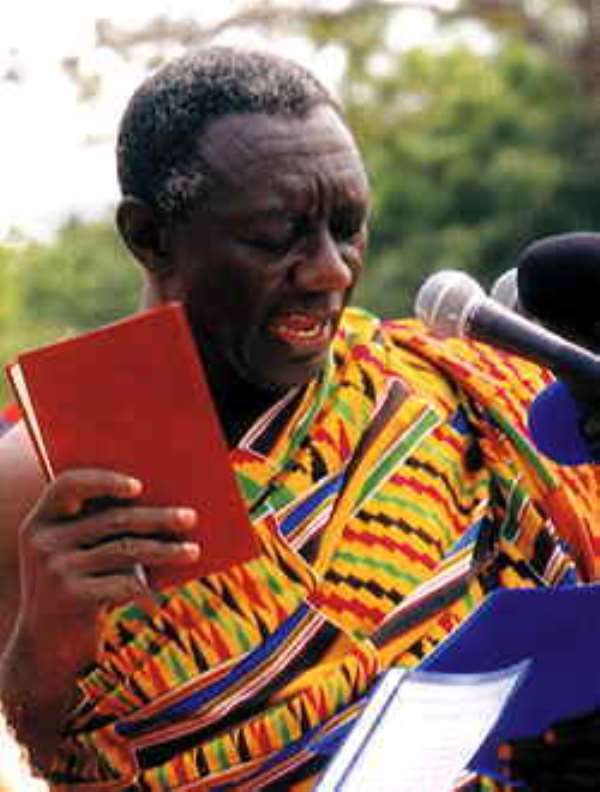 Prepared for CDD Workshop on Economic Governance 1.0 INTRODUCTION I have been tasked to review the 1992 constitution and identify provisions that hinder or promote economic growth and development in Ghana. I believe this is an important exercise because it is now widely acknowledged that an appropriate legal and regulatory framework is a sine qua non for economic development. For instance, the second pillar of the World Bank’s Comprehensive Development Framework underscores that no equitable development is possible without an effective system of property, contract, commercial laws and other elements of a comprehensive legal system. Nor is the reason for such a linkage hard to find or understand. A country’s legal and regulatory framework defines and limits the sets of choices available to stakeholders. What organizations (political, economic, social, etc.) come into existence, how they relate to each other, what activities they engage in and how they evolve are all determined by the legal framework. A framework that promotes inefficiency, emphasizes redistributive activity and restrict opportunities will retard economic development. Conversely, one that emphasizes productive activity and expand opportunities will induce economic growth. Our experience of economic and general decline under the PNDC, which was the quintessential rule of man, is a paean to the importance of the rule of law. In 1992, when Ghana promulgated the 4th republican constitution, the per capita GNP was $420. By 2000, when we ushered in the 3rd parliament of the 4th republic, GNP per capita had declined to $340. This decline of about 20% in less than a decade raises three possibilities: (1) in the case of Ghana, there is no, or possibly a negative, linkage between the constitution and economic growth; (2) a constitutional framework may be necessary but not sufficient for economic development; (3) we do not have the appropriate development-facilitating constitutional framework. The experiences of other countries allow us to discount the first possibility. The second possibility appears to have some merit. Clearly, a constitutional framework per se will not guarantee economic development. Other important ingredients include resource availability, visionary leadership and sound economic policies. In the case of Ghana, we are abundantly endowed with resources but even resource-starved countries, such as Singapore, are able to make significant economic strides. I do believe that we had bad leadership under chairman JJR, and the jury is still out on JAK, but I also believe that an appropriate constitutional framework could have minimized the harm that is attributable to bad leadership. For the same reason, while I believe that economic policies are important, it is my contention that a proper legal framework, which encourages transparency and deliberation, should produce sound economic policies, or at the minimum, should avoid bad economic policies. This leaves us with third possibility, to which I now turn my attention. The constitution sets up various institutions and allocates decision rights, presumably in pursuit of the article 36 (1) directive that “the state takes all necessary action to ensure that the national economy is managed in such a manner as to maximize the rate of economic development and to secure the maximum welfare.” In particular, I will focus on the budgetary framework, monetary framework, dispute resolution framework and various anti-corruption tools and show how they detract from, or perhaps enhance, the article 36 (1) aspiration. READ The Complete Document