By Zukiswa Kota - The Conversation 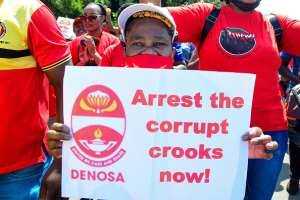 The word corruption has its roots in the Latin adjective corruptus which refers to something that is spoiled, corrupted or perverted .

At the height of the COVID pandemic South Africans witnessed how corruption further exacerbated the unprecedented disruption to their education, employment, entrepreneurial pursuits and other opportunities for advancement .

In September 2021, South Africa's Special Investigating Unit told Parliament that R14.8 billion , associated with COVID-19 spending from April 2020 to June 2021, was being investigated for procurement irregularities.

Mounting cases of procurement corruption are being investigated

An estimated R27 billion is lost to corruption. This represents over one-third of the 2021/22 health budget. In addition, between R159 and R400 billion is lost in illicit financial flows annually in the country.

Is South Africa doing enough to transform a state of 'corruptus in extremis'? The phrase famously appeared in the American animated sitcom The Simpsons in which Mayor Quimby exhibited the phrase meaning 'extremely corrupt' on a crest on his office wall. The mayor was allegedly a parody of US senator Ted Kennedy.

We argue that South Africa isn't doing nearly enough. Key regulatory and oversight agencies are underfunded . This can have dire consequences, especially for the delivery of public services. The greatest impact is felt by the most vulnerable . Corrupt activities redirect money that was intended to reach key sectors such as housing , income grants and public healthcare.

In addition, the country has made slow progress recovering assets lost to state capture and corruption.

South Africa's National Anti-Corruption Strategy seeks to commit the state to a 6-pillar anti-corruption strategy. One of these aims to:

Over the medium term, the National Treasury states that it is committed to working with departments to assess the efficiency, effectiveness and performance of key programmes.

According to the finance minister, this will be achieved by prioritising funds to improve capacity in institutions combating crime and corruption.

There are other positive policy pronouncements. The Anti-Corruption Task Team has been enhanced. And there have been key appointments and recent high-profile investigations.

Since 2018 there have been important efforts to strengthen flailing leadership and governance in the National Prosecuting Authority and the Special Investigating Unit as well as the Anti Corruption Task Team.

And the multi-stakeholder Open Government Partnership platform is showing some signs of re-awakening. A national action plan has been tabled. It includes commitments for open procurement, fiscal transparency and beneficial ownership transparency.

But the plan has been criticised for its weakness . In addition, The Presidency's silence about it is cause for concern, particularly given that South Africa was an OGP founder-member.

A crucial issue to monitor is the extent to which the priorities emphasised in the National Anti-Corruption Strategy are supported in the budget.

There have been some worrying trends. Budget cuts have been made to important programmes. There has also been slow progress in meeting performance indicators in key programmes.

The call in the medium term budget for stronger anti-corruption interventions was not adequately backed by meaningful financial resourcing.

The National Prosecuting Authority conducts criminal proceedings on behalf of the state. In 2021/22 its budget was increased. But the real term value, after factoring inflation was marginal. This has been identified as a risk to its ability to continue to compensate recently recruited staff.

Similarly, the head of the National Prosecutions Authority has stated that budget and other resource constraints continue to undermine the institution's capacity.

But the National Prosecutions Authority faces criticism that it's been slow fulfilling its mandate. For instance, in the 2021/22 financial year, it convicted only 29 government officials for corruption and/or related offences against an annual target of 232.

Moreover, 43 people were convicted of corruption in the private sector against an annual target of 158.

The job of the Special Investigating Unit is to institute civil action to recover ill-gotten gains. But it hasn't been given any additional funding. Sufficient and increased funding would help build the unit's capacity to confront complex and high-level corruption cases.

A recent investigations revealed a criminal syndicate involving public officials, private companies and the use of ID numbers of dead people to illegally claim payments from the Unemployment Insurance Fund.

The budget for the Department of Justice and Constitutional Development has also been cut. The reduction is troubling given that South Africa urgently needs to reform outdated processes.

The cuts are affecting the department's ability to increase access to justice services and to accelerate the turnaround times of expensive and lengthy corruption court proceedings.

Another institution affected by budget cuts is the Public Service Commission. Its remit includes promoting constitutional values and the principles of public administration. The commission's Integrity and Anti‐corruption programme had its budget cut.

Budget reductions like this call into question government's commitment to realise its stated claim of tackling corruption. The programme reportedly met its performance targets for the first half of 2021/22. For example, 100% of public administration investigations were investigated and finalised within 90 days against a target of 60%.

The Department of Cooperative Governance and Traditional Affairs also has a role in anti-corruption efforts. The local government sphere is often cited for its service delivery failings as well as alarming levels of maladministration.

The consolidated general report of local government audit outcomes for the 2019/20 financial year indicates that only 27 municipalities (9.7 %) achieved clean audits. And only 28% of municipalities submitted quality financial statements for auditing.

Given this bleak state of affairs, financial support for the department's key programmes becomes even more crucial. Unfortunately two of its key programmes have had their budgets cut.

enforcement of consequences for maladministration.

But that on its own is not enough.

It's vital to have targeted, and enabling budget allocations to support anti-corruption institutions in addition to tracking expenditure.

To support improved monitoring activities, it's vital to promote proactive disclosure of procurement and expenditure information. This includes the online publication of comprehensive procurement and contracting information from all phases of the procurement cycle across all organs of state.

It's high time that the National Treasury and Office of the Chief Procurement Officer implement open contracting. This would increase the potential for monitoring and enable more meaningful accountability action in the procurement cycle.

And preventative actions need to be prioritised. Examples include the automation of systems to speed up the detection of conflicts of interest. This is particularly critical where politically exposed people are concerned.

Steps also need to be taken to improve the collection of beneficial ownership data. This can be used to help detect potential signs of bid-rigging and conflicts of interest.

This would also help track and ultimately reduce illicit cash flows. While South Africa has an existing definition of a beneficial owner in the Financial Intelligence Centre Act, this definition needs further refining to ensure a more comprehensive net is created.

These trends and indicators provide compelling grounds to call on the government to escalate its open government interventions, to properly resource anti-corruption interventions and to take resolute steps towards open contracting, procurement and overall transparency reforms.

Lastly - and perhaps most importantly - effectively capacitating more ethical public institutions while proactively addressing instances of capture need to be central to the reform agenda.

It is not too late to change the script and direction with regard to South Africa's corruptus in extremis.