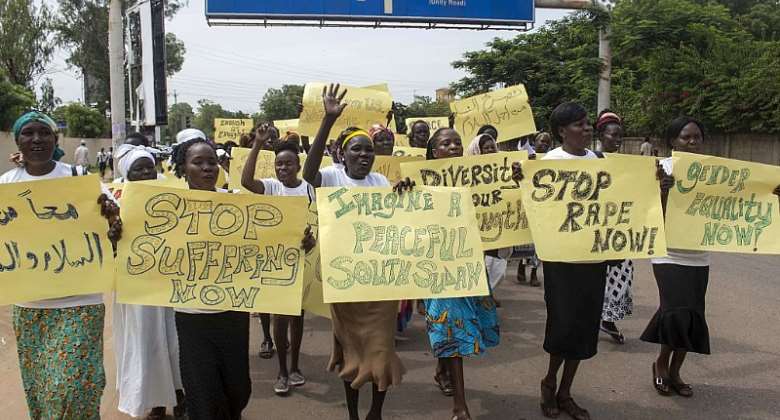 Women march with placards calling for peace and their rights on the streets of South Sudan&#39;s capital, Juba, in 2018. - Source: BULLEN CHOL/AFP via Getty Images

South Sudan became an independent country following a long armed struggle to break away from Sudan. At a referendum in 2011, millions voted in favour of secession, creating Africa's 55th independent state . Since then, the nation of 11 million has been governed under the Transitional Constitution .

The process of drafting what is referred to as a 'permanent' constitution started in 2012. But it was interrupted by the conflict of 2013 and then again in 2016. The conflict was eventually defused by an agreement between the warring parties in 2018.

South Sudan is, therefore, yet to draft a constitution that the country's population can call its own. This is unlikely to take place so long as obstacles to effective people's participation remain. These include the slow implementation of the 2018 agreement which is the mainstay of peaceful coexistence. There is also large number of displaced people who have fled the country , and the lack of civic freedoms to ensure participation without threat or intimidation.

First, the unity government should prioritise grassroots reconciliation after the devastating conflicts of 2013 and 2016. This is a precondition to meaningful people's participation in constitution building.

Second, the government in collaboration with development partners, should facilitate the return and resettlement of all internally displaced people and refugees.

Third, the government should prioritise implementation of law reforms that allow freedom of expression which is a necessary democratic safety valve.

People as sovereigns in constitution building

People's voices in constitutional design are the bedrock of political legitimacy. This is even more so in divided nations, where the coming together of its various and often antagonist constituencies requires trust and confidence building. Achieving this through constitutional design requires a transparent process in which all feel included.

The 2018 agreement acknowledges the centrality of people's sovereignty on whose consent a viable state may emerge. It stipulates that the 'permanent' constitution shall be based on 'supremacy of the people of South Sudan' . This is also affirmed under article 2 of the Transitional Constitution.

The 2018 peace agreement also puts in place mechanisms to engage the people of South Sudan in crafting their governance framework. It provides for a timetable in which the National Constitutional Review Commission is to

Whilst these plans are plausible, they are not sufficient to effectively capture all South Sudanese voices. To be legitimate, the 'permanent' constitution must overcome three main barriers to popular participation:

The United Nations High Commissioner for Refugees estimates that ' 4.3 million people have been displaced in South Sudan ', with two million living as refugees in neighbouring countries. These are Sudan, Ethiopia, Democratic Republic of the Congo, Uganda and Kenya. This represents almost half of the country's population uprooted by the conflict, and who are in desperate need to return home and participate in rebuilding their communities.

Of the more than 2 million internally displaced people, 200,000 are sheltering in United Nations protection sites .

When one adds the ever-growing ranks of South Sudanese voluntarily leaving the country, it is conceivable that the large majority of people might be excluded from the process.

It is true that even in situations where there is peace and democratic governance, not everyone participates in the constitution building process. Some simply disengage, others are challenged by demands of the process of participation, such as language barriers and distance to and from consultation venues. Others could even voluntarily disengage from the process because they may have lost hope.

Added to this is the fear instilled in ethnic minorities owing to the shrinking civic space and bulldozing role of militarised groups whose voices continue to prevail over everyone else.

The 2018 peace agreement has not fully ended the conflict in South Sudan. Ragtag groups continue to engage in military confrontation with government forces. There is also frequent inter-communal violence that continues to displace communities. The agreement's transitional justice mechanisms – which include a Truth Commission – put forward to promote peace and justice have not been implemented. This has left local peace efforts captive to political influence by elites that are yet to truly reconcile.

The conflict that erupted in 2013 and again 2016 was only arrested through a formal agreement in which parties agreed to cease hostilities and formed a national unity government. But communities remain unreconciled and divisions among them run deep. Yet a meaningful participation of people cannot take place in conditions of insecurity, intimidation and antagonism. Peace-building at grassroots should, therefore, be prioritised.

Constitution building in South Sudan is about redefining the future of the country and its peoples. It is, therefore, imperative that all people participate in this process. The government should facilitate the return and resettlement of its displaced population. They can then participate not just as individuals, but as members of a community with shared aspirations.

By J. Geng Akech, PhD candidate, University of Pretoria And

Magnus Killander, Professor, Centre for Human Rights in the Faculty of Law, University of Pretoria

Hottest Photo Reports
Catch up with all the political quotes from our politicians.
Advertise here
More Article
ModernGhana Links
2023 Power Shift: A Greek Gift? (Part 1)
Prepare for Robust Future Defence from Pandemics- Kulpati
Somaliland's quest for recognition: UK debate offers hint of a sea change
Digitalisation is key for resilience
Explosion at Apiete must awake our national consciousness on safety
Utilize digital technologies to enhance welding training to spur employment in Ghana
Why education systems should build environmental ethics into every subject
The Recent Clashes In Mamoobi-Nima: The Gab Analysis
Eden Hazard And Lessons For Nigerian Youths
TOP STORIES