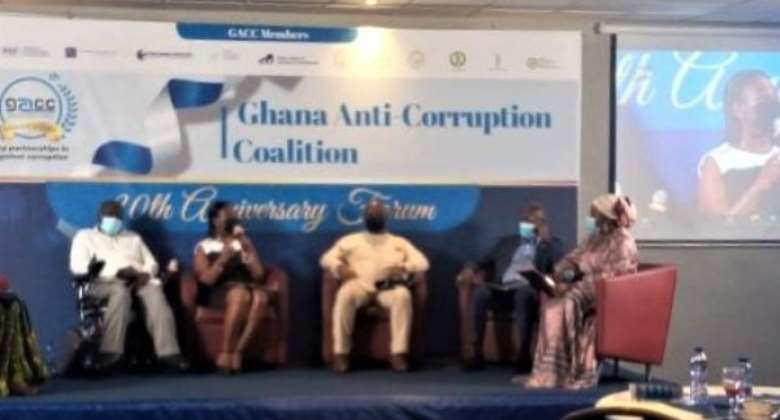 Mr Alfred Tuah-Yeboah, the Deputy Attorney-General, has asked banks to flag unusual huge sums of money deposited into the accounts of their clients.

“If possible, let's make it difficult for people to spend money they got from corruption in order to discourage people from stealing into their coffers just as it's done in some of the advanced countries,” he said, urging banks to join the fight against corruption by flagging those accounts for investigations.

Mr Tuah-Yeboah made the call at the 20th Anniversary Forum of the Ghana Anti-Corruption Coalition (GACC) in Accra, on the theme, “20th Anniversary of Building Partnerships in the Fight against Corruption.”

He noted that it was becoming difficult to prosecute corruption cases due to unwillingness of the public to volunteer information backed with evidence and charged all stakeholders, including banks to join to campiagn.

Mr Tuah-Yeboah described corruption as a high-risk activity with low or no gains and said, “As an office, we are willing to do our part, but many people are not ready to talk even though they have information in their offices, institutions and other places that would help all of us to discourage corruption.

“We have to reinforce our efforts to fighting corruption and build resilience for society to stand the threats of tomorrow,” he stated, stressing the need for all to get involved.

Dr. Angela Lusigi, the UNDP Resident Representative, in a speech read on her behalf, said corruption was one of the biggest impediments to achieving the SDGS worldwide.

Globally, over one trillion dollars was paid as bribes and over 2.3 billion dollars stolen, she said, adding that the UN estimated that funds lost to corruption represented 10 times the amount to social debt assistance.

Speaking of the need to undertake accelerated actions to control corruption, she said the UNDP was ready and willing to continue to support the GACC and called on all actors to promote efforts at esuring public accountability and trust.

Mrs Yvonne Atakora Obuabisa, the Director of Public Prosecution, Ministry of Justice and Attorney General, called for stringent punishments to be given to culprits of corruption, adding: “The knowledge that when I do something, I will be punished is what will deter people from committing crimes, including corruption.”

Mrs Beauty Emefa Narteh, the Executive Secretary, GACC, highlighted some of the contributions of the Coalition to reducing corruption, such as supporting in the passage and implementation of the Whistleblowers Act 2006 (Act 720), Right to Information Act 2019 (Act 989), Office of the Special Prosecutor Act 2018 (Act 959), Witness Protection Act 2018 (Act 975), and Public Financial Management Regulations 2019 (L.I. 2378).

Mr Roland Affail Money, President, Ghana Journalists Association, said the media had an indispensable role to hold duty bearers accountable for their actions and commended journalists who had put their lives on the line to fight corruption considering how dangerous it was.

Mr Akwasi Abeasi, a former Board Chairman, Ghana Investment Promotion Centre, condemned the practice where people were given preferential treatment in society because of their financial strength, saying, “That practice should cease. Money is not everything, it is our conscience that we should look at.”