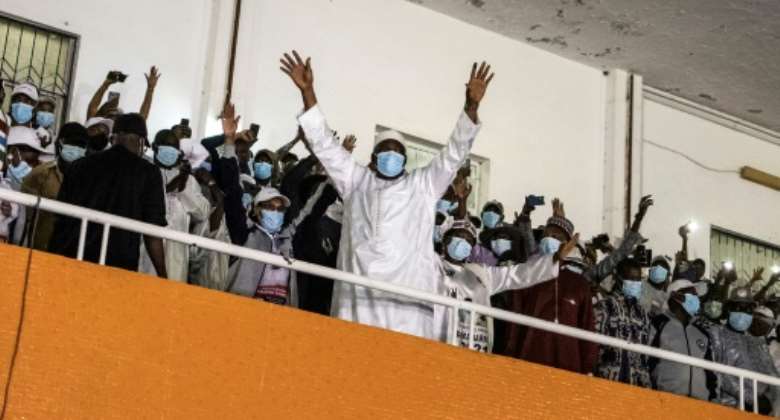 Re-elected: President Adama Barrow waves to supporters after the electoral commission announced the results on Sunday. By JOHN WESSELS (AFP)

The United States has given its approval to The Gambia's presidential elections, hailing the victory of incumbent Adama Barrow after a ballot in which it said observers noted only "minor" irregularities.

"Gambians cast their votes with a turnout of nearly 90 percent of registered voters in a free and fair presidential election that was held peacefully," the US State Department said in a statement seen Wednesday.

Last Saturday's elections in the fledgling democracy have been closely followed in West Africa and beyond.

Barrow was seeking re-election after a five-year term that brought the curtain down on 22 years of dictatorship under Yahya Jammeh.

According to official results, the former property developer notched up 53 percent of the ballot, far ahead of political veteran Ousainou Darboe's 27.7 percent. Turnout was 87 percent of the electorate.

But Darboe and two other defeated candidates have contested the results, spurring concerns about a post-election rift, although he has also called for calm and told his supporters to reject violence.

The American statement said "the United States Embassy and other observers noted some minor procedural irregularities, as well as the need for broader structural reforms to the electoral processes, which are contained in stalled constitutional and electoral reform legislation."

It called for any grievances to be addressed "through the established dispute resolution process" and for the outcome of this to be respected.

It also urged Barrow to press ahead with the "many reform efforts" he had promised in 2016, when his surprise election victory led to Jammeh's ouster and eventual departure to Equatorial Guinea.

These include an overhaul of the current constitution, dating from 1997, which does not set presidential term limits, and on accountability for crimes committed under Jammeh era.

Barrow on Tuesday promised to set term limits and for presidents to be elected by an absolute majority rather than through the current first-past-the-post system.

But he fell short of a commitment to follow the recommendations of a newly-published report by a truth and reconciliation commission probing Jammeh-era crimes.

In a preliminary report, the European Union's observer mission said The Gambia had made "democratic headway" in the elections, as shown by "wide voter participation and citizen engagement."

But it added there were "critical gaps, restrictions, and legal uncertainties that require significant reform."