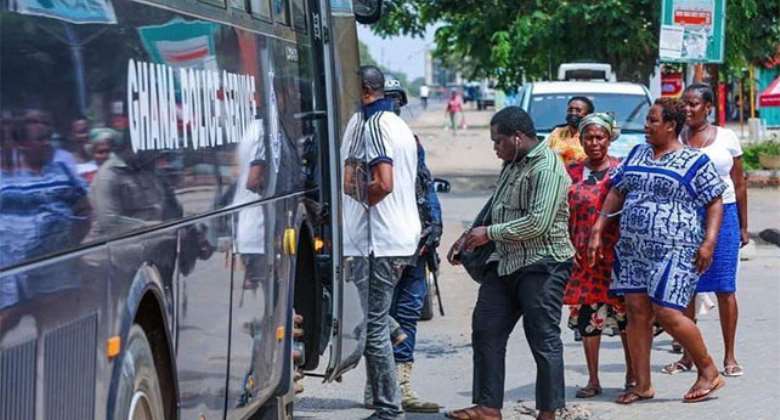 Commuters being ushered into the police bus last Monday

Stranded commuters, some of the women with babies straddled on their backs and schoolchildren were rescued from their predicament when buses from the Ghana Police Service were ordered to help them out.

It was a feat which earned for the Police Administration, especially the IGP/Dr. George Akuffo Dampare an invaluable PR dividend.

Some of the commuters surprised by the police gesture could not believe what was unfolding before them.

Armed police officers deployed to ensure law and order gesturing to them to board the waiting buses added to the surprise.

A law enforcement department undergoing transformation is a development worthy of commendation, was somebody's remark upon witnessing the spectacle.

Even as the police officers rendered humanitarian service to the stranded commuters, some of their colleagues were busy ensuring that the rampaging drivers were stopped from their unruly acts.

For the commuters who boarded the police-provided buses, that being the first time they were enjoying a gratis gesture from the police, it will remain a memorable ride.

In the end, persons who became destructive and damaged the vehicles of persons who decided not to be part of the strike action were arrested and processed for court yesterday.