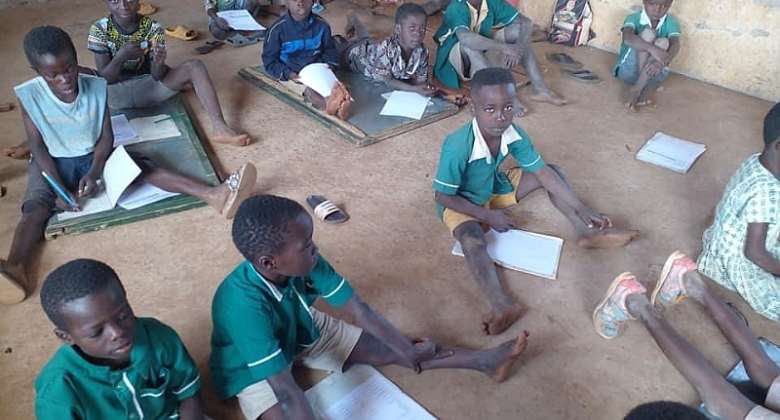 School Children in Eggu R/C Primary School in Wa West District of the Upper West Region study on the bare floor due to lack of furniture.

The pupils, according to the headteacher, are compelled to use wood slaps as tables and either lie on their bellies or sit on the bare floor to write.

Eggu R/C Primary School is a six-unit classroom block which has a 297-students population.

Mr. Malik Seidu, headteacher of the school says the school is yet to witness any major renovation since its establishment.

This situation leaves the innocent pupils in distress as they are forced to study under unfavourable conditions.

Some pictures taken for this story show the sad situation of the pupils dressed in uniform and lying on the bare floor in their classrooms to take their end of year examinations.

The pupils and the school's authorities are appealing to the government, non-governmental organisations and the general public for support.

Latest Photo Reports
Catch up with all the political quotes from our politicians.
Advertise here
More from Education
ModernGhana Links
Otumfuo Osei Tutu II Foundation donates science textbooks to 24 deprived schools
Quality education is a combined responsibility of all — PTA Executive
Parents urged to collaborate with teachers to develop the reading abilities of pupils
TOP STORIES