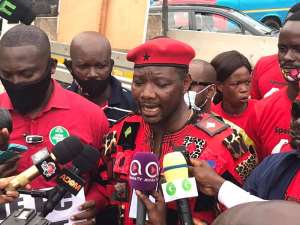 The Ghana Police Service (GPS) has secured an injunction against a plan by a group to picket at Parliament House.

The injunction, which was granted by the High Court in Accra, will, however, not affect the group’s planned demonstration.

It planned to embark on a demonstration against the 2022 budget in Accra on Wednesday before converging on the forecourt of Parliament, where its members plan to pitch camp until the budget is withdrawn.

Information reaching Citi News however suggests that the police filed an ex parte application at the High Court after the two sides disagreed on the issue of picketing in Parliament, which has since been granted.

The Police Service however says it is ready to provide security to the demonstrators on Wednesday, although it will prevent them from occupying Parliament House.

The police argued that the plan by the group is a breach of security and also poses a health hazard considering the anticipated numbers amidst the COVID-19 pandemic.

The last time protestors tried to enter Parliament, they were denied.

Organisers of the #FixTheCountry protest on November 26 were only given the option of having a few of their leaders enter the premises of Parliament to present a petition.