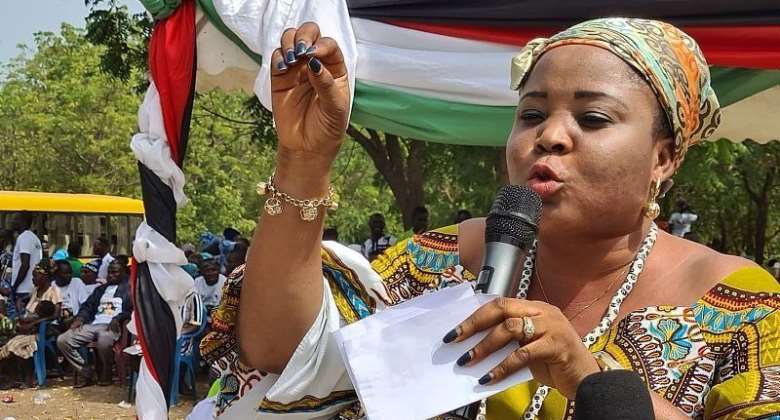 The Member of Parliament (MP) for the Afram Plains North constituency in the Eastern Region, Betty Nana Efua Krosbi Mensah has handed over a completed Community-based Health Planning and Services (CHPS) located at Gudupe - Faaso Battor, a remote island Community to the Ghana Health Service.

This is the second out of three abandoned CHPS projects in the Afram Plains North area since 2017 that the MP has completed and handed over to Ghana Health Service.

In December 2020, Ms Betty Krosbi Mensah used her own resources to complete the abandoned CHPS facility at Abotanso and handed it over to the health authorities. In 2015, three communities in the Afram Plains North area including Abotanso, Faaso Battor and Supom benefited from the construction of CHPS with proceeds of the austere 10% salary cut announced by former President John Dramani Mahama and his appointees in 2014 to bring healthcare closer to all citizens irrespective of their geographical location.

However these projects which are dotted across the country were abandoned after the 2016 elections.

In order to help address the health challenges facing her constituents, the MP through her instrumentality and commitment again mobilise funds for the completion of the Faaso Battor project at the cost of GHS180,000.

Addressing Chiefs and people of the area during the handing over ceremony, the Afram Plains North lawmaker who is also a member of the Health Committee of Parliament expressed concerns about the culture of abandoned health projects across the entire country by the Akufo-Addo government.

According to her, health delivery must be a priority to all and urged government to dedicate resources for the completion of all abandoned projects started by the erstwhile Mahama administration for the benefit of all.

The MP assured of her continuous willingness to support her constituents in whatever means possible for the development of the area.

The Assemblyman for the Faaso Battor electoral area which comprises over ten communities, Michael Amelewu on behalf of the Chiefs and people thanked the MP for coming to their aid in completing the project.

He also expressed the gratitude of the people to the MP who recently supported the first phase successful surgery at the Korle BuTeaching Hospital of their five-year-old son, Caleb who was suffering from a hole-in-heart condition.

Dumefia (Chief) of Faaso Battor Togbe Matthew Kudanu also expressed gratitude to the MP for her foresight and prayed for God's guidance for her in all efforts.

He urged political parties to live delible imprints on the minds of people through their project initiatives to help residents make informed choices.

The Afram Plains North District Medical Director, Francis Kotua Apungu who received the keys to the facility expressed gratitude to the MP for her relentless effort at strengthening health delivery in the area describing her as a "very proactive MP".

According to him, the facility will provide a 24-hour health service to the community.

Mr Apungu appealed to the MP and other well-wishers to help secure a solar vaccine fridge and a motorbike for the facility.

He also appealed to central government to as a matter of urgency regularise casual staff and post-critical staff such as Medical Doctors to help strengthen healthcare delivery in the district and address issues of retention of Internally Generated Funds (IGFs).

The Faaso Battor CHPS Compound comprises a 3 self-contained bedroom, a storeroom, an Outpatient Department (OPD), a ward, a consulting room, a kitchen and two toilets.

Others are the Eastern Regional Organiser of the National Democratic Congress (NDC), constituency and branch executives of the party.