A special staff meeting was organised by the Tano North Municipal Assembly for its Heads of Department to update the MCE on the activities, directives of staff performance and the way forward in the municipality.

In a short but impressive address, the Municipal Chief Executive Hon. Ernest Kwarteng welcomed all present and praised the Heads of Departments in the Municipality for their continuous support for his appointment at the first section of the Assembly when he was DCE until they obtained Municipal status.

He advised them to give him their maximum co-operation as they did for the previous years.

He continued that it was for their prayers that he was re-nominated for the second term and asked the Heads of Department to be up and doing by focusing more on the fieldwork rather than to be at the office.

He drew attention to sanitation issue in the Municipality and implored the Zoomlion agency to intensify their work.

He was also unhappy about unauthorised physical structures around and said the people were not happy with the Assembly at all.

The MCE therefore charged the authorities concern to ensure proper permits and sanctions. 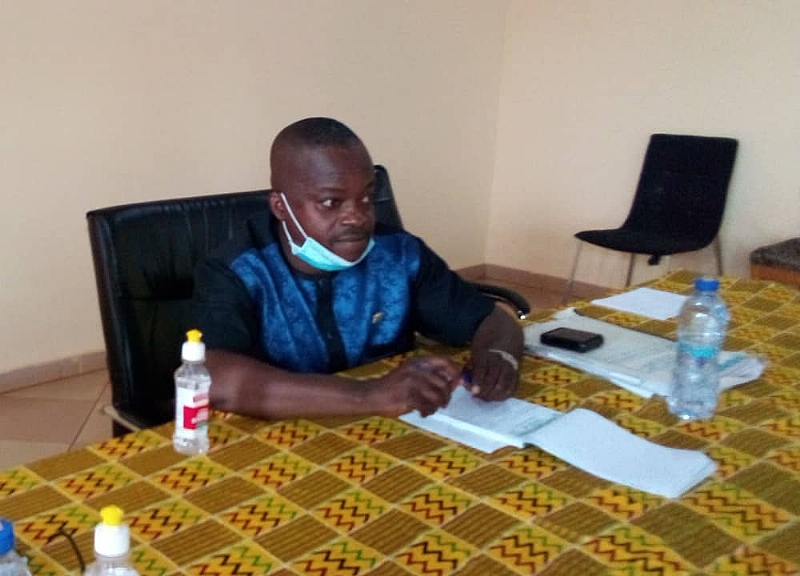 Hon. Kwarteng charged the Departmental Heads to think outside the box for innovations to bring development in their respective department.

He added that they should not expect someone to complain before they take action and asked the Municipal Financial Officer to do well to block all the financial linkages in their revenue sector and to increase Internal Generated Funds to support the Assembly.

According to him, they have not received any Common Fund throughout the year and he foresaw that in the unforeseeable future the central government could ask the local government to generate their internal fund for developmental projects.

Hon. Ernest Kwarteng said this at the meeting with the Heads of Department for the first time in his second term of re-nomination as the MCE at the Tano North Municipal Assembly hall in Duayaw Nkwanta.

For his part, the Municipal Coordinating Director Mr. Eric Anarfi urged the Departmental Heads to take their core mandates seriously and support the growth of the Municipality.

Briefing the Assembly on education, the Tano North Municipal Director of Education Madam Veronica Adu-Saforo said the Directorate has given laptops to the Yammorasan community and vigorously embarked on ‘Back to School campaign’ especially teenage girls.

She noted that the Ghana Education Service with the Ministry of Education has adopted digital divers for monitoring and evaluation on teaching and learning, digitalising Classrooms for E-learning and supplied for the printing of examination questions of 2021 BECE which started on 15 November.

She noted that the only challenge they face now is the equitable distribution of staff to the health facilities.

Tano North Municipal has two major hospitals with St. John of God Hospital having 475 Staff, 10 CHPS compounds and 15 other CHPS yet to be completed.

Miss Eva Aryee said, the Health Directorate has received enough of covid-19 vaccines which is available for vaccination. She added that so far prisons officers, ambulance service staff, immigration Service staff have been vaccinated except police service who are yet to be vaccinated.

She appealed to the Assembly to support them in terms of funds and fuel to reach most of the communities for vaccination and sensitisation.

She disclosed that TB cases are very minimal.

The St. John of God Hospital Biostatistician Mr.George Garbrah said the hospital is the best in orthopaedic and most of the patients come as far from La Cote d'Ivoire for treatment.

On Agriculture, Mr. Ezena Godfred said they have rice processing equipment at Buokrukruwa which they do weekly markets survey to ascertain the prices of goods.

According to her, the only challenge they have is about the inadequate Agric Extension offices. NABCO personnel who were initially assisting in the regard and now that their service has come to an end.

NHIS Director Mr. Ankamah Gabriel alleged that he received complaints from clients that the hospitals are charging patients for laboratory testing and other health delivery services meanwhile the NHIS is paying the claims to the hospital. He therefore appealed to the vulnerable and patients to report any wrongful charges.

Again, he said the NHIS card would soon be synchronised with the Ghana card and asked individuals to dial this short code *929 hash for details.

The Ghana National Fire Service and Immigration Service representative promised to intensify their public education in the municipality.

A representative from the North Electricity Division Company (NeDco) Mr.Samuel Sarquah complained about chainsaw operators’ activities as worrisome. He indicated that some of the activities cause frequent power outages as felling trees fall on the electricity main line to trip power. He reiterated that most post-paid users owe them and defaulters will soon be disconnected.

Community Water complained that most of their activities involve the use of electric power and frequent power outage hinder their work. Again the public owe them and they would embark on mass disconnection as well.

What's the big deal if military is withdrawn from Speaker Ba...
10 minutes ago

Bogoso explosion: 500 houses blown into pieces at Appiatse
12 minutes ago