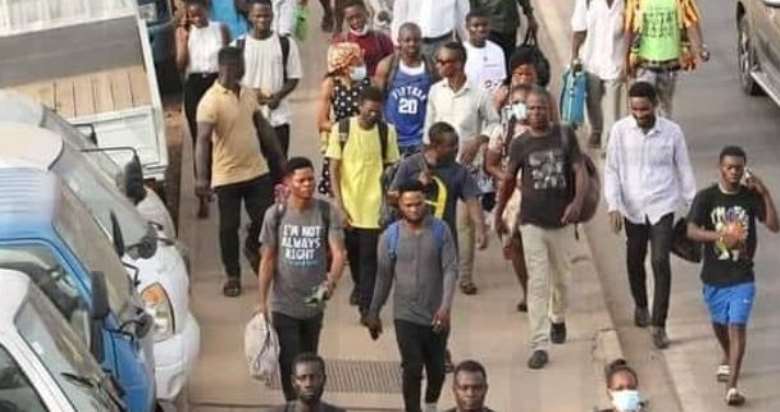 As my beloved Ghana reflects on the strike embarked on by commercial drivers which saw scores of citizens some who could not afford skyrocketing prices of the ride-hailing services had to walk to their destinations.

Once again the politicians with which we have a social contract will always. wait for issues to occur before reacting, well they are not to blame since some of them since apart from the V8 they also enjoy free fuel so they would not feel the impact of what the Ghanaian who always has to depend on public transport to commute from one place to another go has to go through.

It was sad as some had to skip work while others persisted through the scrambling for seats the few buses left in the bus terminals that had turned chaotic as stranded passengers who were trying to find their ways to their various destinations.

This is not the first time commercial drivers are embarking on such an industrial action and it reflects how mostly politicians knee jerk approach in addressing grievances is not yielding any result it is high time carefully thought through solutions are provided to resolve the grievances of most unions.

Though sometimes these issues of

industrial action is not predictable I believe the first instance and second times they hinted about their intentions if they had been called to the negotiation table earlier the situation could have been avoided.

It is high time the government stopped being reactionary to such issues earlier negations could have prevented the unpleasant walking situation passengers ready to move out to engage their economic activity had to go through this morning.

Latest Photo Reports
Catch up with all the political quotes from our politicians.
Advertise here
More Article
ModernGhana Links
When Social Justice is reached, Dr. King’s dream is realized
Airline tie-up for Kenya and South Africa: possible rewards, and risks
Why merging Uganda’s electricity sector agencies is a bad idea
How Africa's entrepreneurs are handling the continent's challenges: new book
Legal tools exist to protect South Africa’s city ecosystems: it's up to councils to use them
Ruth Lindenberger is new face of NPP Germany Youth Wing
Youth In Innovative Agriculture Support: A Laudable Initiative That The Youths Must All Embrace
South Asia Needs China In Its Development Process
No excuse not to end the acute stage of pandemic globally
TOP STORIES