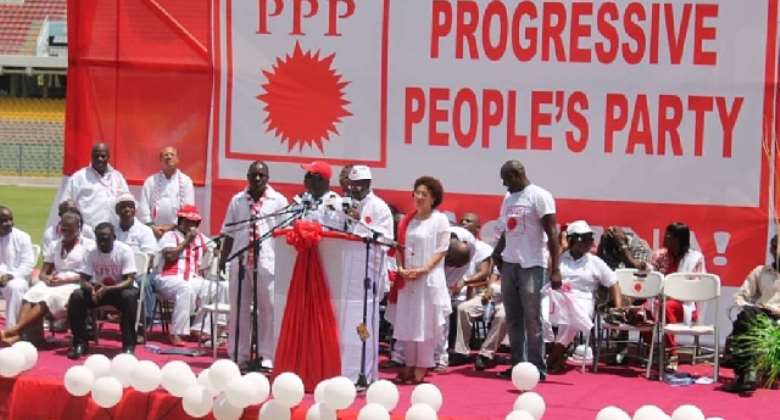 The Progressive People’s Party (PPP) is proposing an amendment of the 1992 Constitution to allow Ghanaians who hold dual citizenship to fully participate in the governance of the country.

“We must introduce an amendment to the Constitution to clarify and allow Ghanaians living in the Diaspora to be fully eligible to participate in the democratic process”.

This, according to the PPP, “will ensure full citizenship rights to Ghanaians living abroad so that they can vote and serve in public sector positions. There is no justification whatsoever to deny our kith and kin such rights when they pour into our economy huge sums of foreign exchange by way of remittances to family and friends”.

“We should also be reminded that on many occasions we have sought and continue to seek the expertise and skills of Ghanaians in the diaspora in the area of sports, medicine, engineering, finance, academia, international relations, economic development and other wide range of consultancy services in different areas of our national life. We must restore full citizenship rights to our brothers and sister in the diaspora and clarify provisions on their qualification to become Members of Parliament and to hold other public offices”, the statement said.

We thank you for responding to our invitation to this important press conference to mark the observance of 7th December 2021 as the fix the constitution day of the PPP.

In September 2021, we declared December 7th as the fix the constitution day. It was and still is our aim, to remind Ghanaians of the need to conduct a surgical operation on the 1992 Constitution in order to make it a development and people-oriented Constitution for the Republic of Ghana.

It is evident that after three solid decades of operating this document, a number of the aspirations in its preamble have eluded the good people of Ghana.

Ladies and gentlemen, our consistent advocacy for changes to be made to the 1992 Constitution, is fueled by our undying passion to see the people of Ghana prosper in peace. With this current dictatorial, winner-takes-all constitution which allows for 'create, loot and share' by all parties that have been in power since 1992, the future does not look exciting.

It will only become better if we make some fundamental changes to our constitution which will affect our politics and also affect the way we develop. Despite the numerous changes we have proposed in the past, we would like to stress and reiterate the following for consideration and to be implemented before the 2024 General Elections.

The five areas are as follows:

• Return power to the people for all Ghanaians to directly elect their district, municipal and metropolitan chief executives without any interference from the President and cancel government appointees into the District Assemblies;

• Prohibit Members of Parliament from being appointed as Ministers of State or MPs must resign from parliament after their ministerial appointment;

• Strengthen the office of Attorney-General by separating it from the Ministry of Justice;

• Introduce a Public Declaration of Assets Regime; and

• Clarify the eligibility of Ghanaians in the Diaspora to hold Public Office MMDCEs [Amend Articles 242(d) and Articles 243(1) & 243(3)] It will be superfluous to recount the benefits of electing directly and by Universal Adult Suffrage all our Metropolitan, Municipal and District Chief Executives (MMDCEs) as well as all the Members of the District Assemblies.

We would like to emphasize that the concept of government appointees should also be completely abolished. This matter has been flogged over the years with elected governments demonstrating a lack of political will to empower the districts to elect their Chief Executive Officers who are the true agents of development.

The Members of Parliament (MPs) whose job is to pass legislation have arrogated to themselves the role of development agents with no constitutionally allocated resources. The result is that MPs have resorted to all kinds of unorthodox ways and policy violations to attempt to bring some piecemeal development to the people.

For example, the office of the Chief Executive has become a trophy to be won and hijacked by elected political parties to reward party members who could neither become MPs nor Ministers of State. It is therefore not surprising, as their tradition, to see the current General Secretary of the ruling party travelling around the country to conduct the so-called vetting of applicants mostly, party foot soldiers, who have applied to become MMDCEs.

When did a political party become a substitute for the established Public Services Commission for the vetting and appointments of candidates to occupy public office? The election of District Chief Executives is long overdue because it remains a democratic deficit and a major impediment in the development of the various smaller units that constitute Ghana.

It will ensure that all the resources allocated by the Constitution through the District Assembly Common Fund are demanded by the elected officers and same sent to the districts promptly for local development. It will ensure local accountability, elimination of corruption and rapid development. If citizens are capable of electing the president and members of parliament, they should be credited with the wisdom to decide who governs them at the local government level.

The political chicanery orchestrated by the ruling party to deny the good people of Ghana their power; following the aborted referendum on whether or not MMDCEs should be elected on a partisan basis must be viewed as a coup d’état against the people of Ghana by the political class. The question of a partisan election of MMDCEs or otherwise can only be answered by Ghanaians at a referendum so no one can sit in Accra and deny Ghanaians that opportunity under the pretext of a certain lack of consensus.

How else can you know the position of Ghanaians on this matter other than through a referendum? The president and the other members of the political class cannot and should not use the partisan debate to conveniently deflect the urgent need for all DCEs plus all Assembly Members to be elected freely and by Universal Adult Suffrage. For the avoidance of doubt, we can actually elect our Chief Executives without going for a referendum. All that we need to do now is for parliament to amend articles 242(d) which deals with the appointment of one-third of Assembly Members and Articles 243(1) and 243(3) which deals with the appointment (and disappointment) of the Chief Executive.

Making the referendum on Article 55(3), which prohibits political parties from local government elections, a pre-condition for electing MMDCEs is mischievous and a calculated attempt to postpone once again a very important constitutional amendment. We call on the government to choose patriotism over partisanship in this respect and allow the people of Ghana to elect their own District Chief Executives. If we want Ghanaians to allow political parties to participate in the local government elections, then let the referendum happen now!

[Amend Article 78(1)] We advocate strongly the concept of strict separation of powers because the current arrangement where the 1992 Constitution by design bequeathed Parliament to the Executive has hampered Parliament’s ability to exact accountability from the Executive on behalf of the people. Article 78(1) mandates the President to appoint the majority of his ministers from parliament. This means that more than half of all ministers and deputy ministers must be Members of Parliament.

This has resulted in a compromised parliament which is obviously ineffective in scrutinizing the activities of the Executive to guarantee the judicious application of the nation’s resources. For example, apart from ministerial appointments, some Members of Parliament are appointed as Chair and Members of the Board of Directors of state-owned enterprises, corporations and other institutions thereby compromising the supervisory role of parliament.

These unholy appointments blur the lines of checks and balances. It is our position that if a Member of Parliament is appointed as a Minister or accept any other appointment by the President, then he/she must resign his seat before taking up the appointment. People seeking to become public officers must choose to either become part of the Legislature or the Executive.

This is the only way, to realistically fight corruption. We are calling for a truly independent Attorney General (i.e., the Independent Public Prosecutor) whose budget will be sanctioned by Parliament without any ministerial interference. No amount of political spinning and propaganda can make the current OSP independent of the Attorney General and by extension independent of the Executive. It is evident from our past experience that, it will be fruitless to leave the fight against corruption in the hands of an elected government and its appointees.

For this reason, we propose that the Independent Public Prosecutor (IPP) should be elected directly by the people to check the government against political corruption. The people’s prosecutor will be elected on a different electoral cycle, preferably during the mid-term of an elected government.

The Independent Public Prosecutor (IPP) will be given vast prosecutorial powers with guaranteed tenure, independence, and adequate funding directly from parliament to go after corrupt government officials. The government’s own lawyer will be the Minister of Justice.

Another tool in the fight against corruption is an effective Assets Declaration regime. We believe that the current process where the Assets Declaration forms and its contents are concealed is laughable and ironic. How do you declare and hide something at the same time? It is in this regard that we agree with the recommendation of the Constitution Review Commission for a new Assets Declaration regime where the completed forms are published and can be accessed by any interested citizen for the purpose of verification.

The Constitution Review Commission also recommended criminal prosecution for false declaration, a duty the proposed Independent Public Prosecutor (IPP) will gladly take on board. We need to confront political corruption head-on if we want to safeguard this last attempt at constitutional democracy. Public declaration of assets should be the minimum threshold for any aspiring public officeholder to meet as a condition to holding in trust massive public assets and resources of the republic. If you cannot declare your relatively “small” assets to the citizens, then you have no right to take charge of huge public assets.

GHANAIANS IN THE DIASPORA [Amend Article 94(2)(a) for clarity]

This will ensure full citizenship rights to Ghanaians living abroad so that they can vote and serve in public sector positions. There is no justification whatsoever to deny our kith and kin such rights when they pour into our economy huge sums of foreign exchange by way of remittances to family and friends.

We should also be reminded that on many occasions we have sought and continue to seek the expertise and skills of Ghanaians in the diaspora in the area of sports, medicine, engineering, finance, academia, international relations, economic development and other wide range of consultancy services in different areas of our national life. We must restore full citizenship rights to our brothers and sister in the diaspora and clarify provisions on their qualification to become Members of Parliament and to hold other public offices.

Today is the first of our fix the constitution day observation. We have deployed our regional teams to storm local radio/ TV Stations and repeat this message to ensure that the Executive and the Legislature hear this message and understand it.

We shall not relent but continue to press on this all-important demand The massive amount of money invested in the Constitutional Review exercise must not be allowed to go waste. It shall remain a scar on the conscience of right-thinking Ghanaians if these fundamental changes and many other brilliant recommendations contained in the CRC’s report continue to gather dust. We owe it to ourselves and the next generation to secure and safeguard our democracy and that can only be achieved through these amendments. We remain Awake until these amendments are brought to fruition.