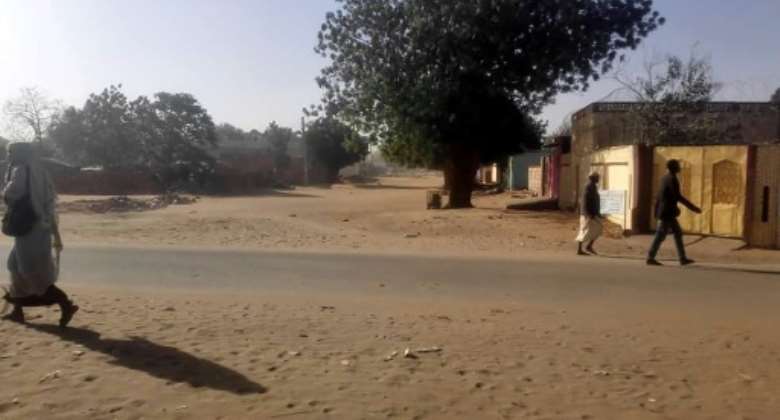 A picture taken on January 20, 2020 shows the area where violence erupted between Arab nomads and members of the non-Arab Massalit ethnic group in El Geneina, the capital of West Darfur. By - (AFP/File)

Close to 50 people have been killed in the latest outbreak of tribal violence in Sudan's Darfur region, a government official and medics said on Monday.

The latest flareup brings to around 100 the number of people killed over about three weeks in Sudan's westernmost region, which has been ravaged by unrest for years.

"The violence began with an argument and it spiralled into killing six people on Saturday and then on Sunday more than 40 people were killed," West Darfur governor Khamis Abdallah told AFP.

The Doctors' Committee, an independent union, said that 48 people were killed in the Krink area of Darfur by live ammunition.

Krink is about 80 kilometres (50 miles) from the state capital El Geneina.

Fifty people were killed last month in days of fighting between herders, the UN said. More than 1,000 homes were also set on fire.

That violence broke out on November 17 between armed Arab herders in the rugged Jebel Moon mountains close to the border with Chad.

Darfur was ravaged by a civil war that erupted in 2003, pitting ethnic minority rebels who complained of discrimination against the Arab-dominated government of then president Omar al-Bashir.

The violence resulted in one of the world's worst humanitarian catastrophes. More than 300,000 people died and 2.5 million were displaced during the conflict, according to the United Nations.

Apart from Darfur's tribal unrest, nearly 45 people have been killed throughout Sudan during street rallies met with a crackdown from security forces since an October 25 military coup.

Sudanese police fire tear gas on Monday when thousands rallied in the capital Khartoum against the military-dominated government.

Bashir, who is wanted by the International Criminal Court on charges of genocide in Darfur, was ousted and jailed in April 2019 after mass protests against his three-decade rule.

A peace deal struck with key rebel groups last year saw the main conflict in Darfur subside, but the arid region has remained awash with weapons. Violence often erupts over land, access to agriculture or water.

On Monday, the UN Office for the Coordination of Humanitarian Affairs (OCHA) said 14.3 million of Sudan's population of 47.9 million, including both citizens and refugees, will require humanitarian assistance next year making it "the highest in a decade".