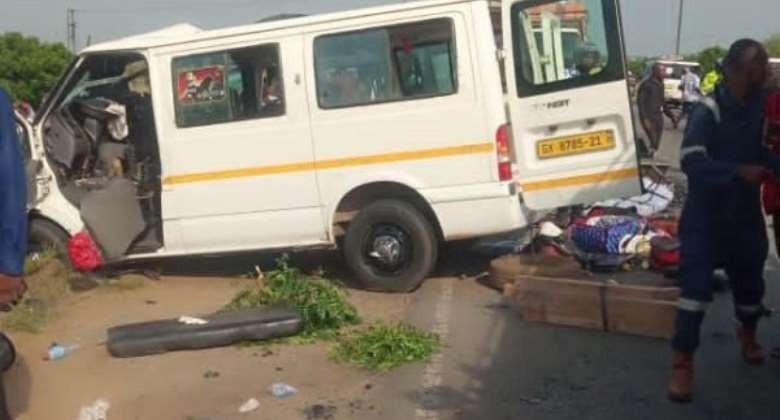 A head-on collision involving two Ford transit mini buses near Sege on the Tema-Aflao Highway over the weekend claimed six lives and injured a number of passengers.

She said the bodies had since been deposited at the Battor Catholic Hospital's morgue for preservation, identification and post-mortem.

Chief Inspector Dzakpasu said preliminary investigations revealed that the accident occurred as a result of human error and careless driving.

She said the error was committed by Abraham Odai, 25, the driver in-charge of the Dzodze bound Ford Transit mini bus, with registration number GX8785-21, and 14 passengers on board.

Odai, in an attempt to overtake some vehicles ahead of him, switched lanes without taking due the precautions, resulting in the head-on collision with the Accra bound Ford Transit mini bus, loaded with charcoal with six passengers on board.

Inspector Dzakpasu said Odai and the other passengers sustained various degrees of injury and were sent to the Sege Polyclinic and Battor Catholic Hospital for treatment.

Meanwhile, the Tema Regional Police Command has admonished all road users to be cautious and abide by all road traffic regulations, especially as the yuletide approaches.

“We also wish to assure you that police personnel will be deployed along the highways to enforce the traffic regulations to reduce road carnage and criminal activities,” she said.