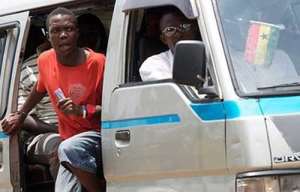 Commercial drivers commenced a sit-down strike on the morning of Monday, December 6, 2021, over the high prices of fuel in the country.

The strike is in line with a warning issued by Driver Unions in the country last month if their grievances are not addressed by the government.

With both workers in the public and private sector stranded and with no means of transportation to get to the workplace, government has reached out to GPRTU for a meeting to resolve the matter.

As a result, GPRTU has announced that the strike action has been suspended ahead of the meeting.

“The intended strike action which was scheduled to take effect today Monday 6 December 2021 has been suspended. The Leadership of the Union had been invited to the Presidency during the course of the Day.

“Development will be communicated to members. We, therefore, entreat our cherished members to go back to their normal duties,” a statement issued by GPRTU has said.