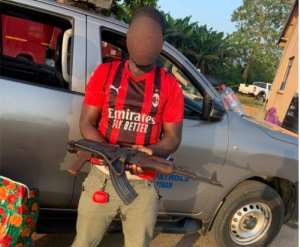 The Police on Friday, December 3 arrested six suspects for their involvement in an illegal AK 47 transaction.

The first suspect, Alhassan Jamah, was arrested near Osino by the National Operations Directorate Highway patrol during a stop and search operation. An AK 47 rifle with 12 rounds of ammunition was found hidden in his travelling bag on board an Accra-Bawku bound Yotoun bus.

All six suspects are currently in police custody assisting with investigation.