If I were Martin Amidu (Hon)…… 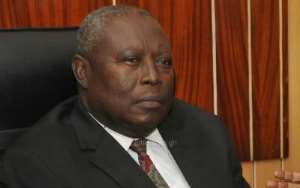 Some people know no shame. I wonder how comrade Martin Amidu (Hon), the recent past Special Prosecutor, who deceptively earned the public recognition as the “Citizen Vigilante”, feels when he verbosely comes out to criticize the NPP government and His Excellency the President, Nana Addo Dankwa Akufo-Addo.

He is so infatuated with criticizing the government on her policies and programmes at any least opportunity he gets. However, if I were him, which of course I can’t be, I will never criticize the government on any of her policies, let alone, her good policies that have the potential to turn the nation around for the better in the long term.

Was Martin not given the chance to serve his nation in the capacity of Special Prosecutor? Is it not official corruption in all its forms and shapes as masterminded and orchestrated by some of the nation’s politicians, civil service heads, religious leaders, traditional leaders and security service personnel that is pulling the nation down in her relentless efforts to secure better standard of living for the citizenry? Is corruption, especially official corruption, not the bane of any nation’s economic emancipation and prosperity?

What position in Ghana could a selfless, dedicated, dynamic and credible person desirous of serving their nation and people to acquire them a better collective living standard and respect hold, than that of a Special Prosecutor? Isn’t the innovative office of the Special Prosecutor so designed to flush out corrupt officials from the system through investigations, prosecutions and convictions? What did we see Martin Amidu, the altruist, loquacious and self-aggrandised “all knowing”, do?

He failed woefully! For all the three years or so that he held the position, he could not prosecute a house-fly, let alone, a goat. He could not seriously or otherwise investigate anyone, let alone, prosecuting them. Nonetheless, Ghana abounds in corrupt officials of whom the nation’s politicians are presumed to be the number one.

Martin, unbeknown to Ghanaians, might have had his personal agenda for accepting that position, the first of its kind in the political history of Ghana. From later revelations came to light following his seemingly untimely but well-planned timing for his resignation, one could rightly say that Martin was all the while harbouring a mischief against the NPP government, if not the people of Ghana.

He kept lying to the Ghanaian public that his office was not being financially resourced and that the government was dragging her feet in providing him and his team with an office, thus, a building for his department; hence his difficulty to doing his job. However, little did the Ghanaian public know that he was lying big time until he was exposed publicly by the president’s version of the whole saga.

This is a failed man who has continuously got the guts to come out seething with rage to condemn and destructively criticize the policies and programmes of His Excellency the President, Nana Addo Dankwa Akufo-Addo and his NPP government, if not the person of the president.

Martin as a citizen of Ghana has the right like any other citizen in the democratic Ghana, to air his views. Nevertheless, if I were him, I will hold my silence for some time to only come out to offer solutions through constructive criticisms when need be. How I wish Martin would for a while bury his head in his palms in shame for disappointing Ghanaians, especially some of those of us who in a way or the other prevailed on the president to nominate him for that post, concluding from his track record of fighting corruption.

His public show of fighting corruption, taking on Ghana’s alleged highly-decorated swindler of the 21st Century, Alfred Agbesi Woyome, the self-styled sole financier of the NDC, deceived many a Ghanaian to see Martin as a man of integrity. However, he may be a wolf in a lamb’s skin.

Why on earth should doing a “risk assessment on the Agyapa investment/transaction deal” lead to accusing the president and his NPP government of involvement in gargantuan corruption in respect to Agyapa?

A risk assessment is conducted in advance of any project taking place to tell what the project is all about, how it will be carried out, time to take, stages of its implementation, possible risks involved and what safety measures to take to mitigate the risks, etc. Therefore, how could some people have corrupted themselves in a project that was yet to be presented to parliament for approval before being implemented? Yet, Martin Amidu told Ghanaians that gargantuan corruption has taken place in the Agyapa deal hence using that excuse to tender in his resignation at a time perceived to cost NPP and the president political or election fortune.

It is much better if Martin Amidu will exercise a bit of constraint, watch himself in the mirror for a second, before embarking on his verbose criticisms of the president and his NPP government on intent to paint them darker than they really appear or are, to probably enhance the political fortunes of the NDC, the political party of his heart desires.