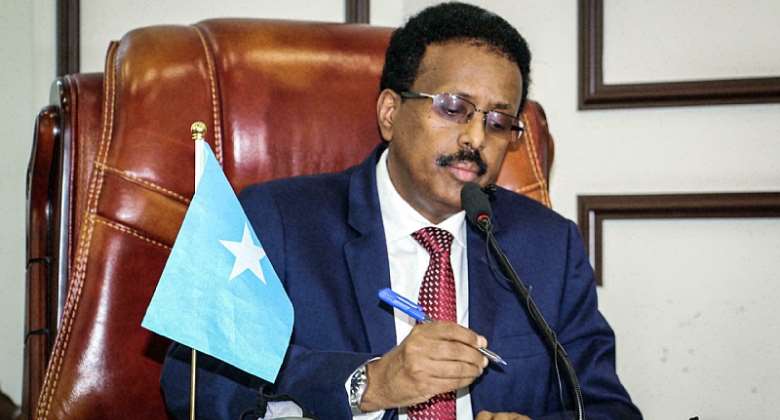 It was a televised speech by the lameduck president. In the name of Allah, the most gracious, beneficial and the most merciful. Firstly, I would like to acknowledge Allah the infallible, omnipresent, omnipotent and omniscient who has offered us this massive and historic victory after the long and unrelenting struggle jointly launched by the people and the government of the federal republic of Somalia against the witless and unlawful attempt by Kenyan government to claim and seize part and parcel of our maritime territory.

It was indeed,a just and lengthy struggle intended to liberate our maritime territory and based on, effective and long vision, deep knowledge, valiant patriotism, the protection of public assets and the defense of the nation and its people, eventually Justice has prevailed, law and order have prevailed, sovereignty and political independence have also prevailed. This massive victory was achieved by the Somali people who have always supported, advocated and stood by their government and their elected leaders. Each time we collaborate and unite for the purpose of patriotism and the defense of our nation. This kind of victory always follows.

It was a televised address broadcasted live to both state-sponsored media and privately-owned media outlets. I would like to express my solemn and deepest gratitude to the international court of justice for upholding the rule of law. This long-awaited verdict exemplifies the integrity, credibility, neutrality, impartiality and transparency of the ICJ.

At the same time the unprecedented and historic decision by the 8th federal Parliament to vehemently and utterly repudiated The MOU was very laudable and commendable, we couldn't have reached this victory today, if it was not their determination to nullify and abrogate the controversial MOU and instead adopt the inheritance protection resolution.

What is also worth mentioning is the noble role of my brother and my predecessor, H.E. Hassan Sheikh Mohamud who officially initiated the court process to seek justice and protect Somalia's maritime borders which were illegitimately claimed by Kenya.

Equally, I would like to appreciate and commend the incredible efforts of the Somali prominent barristers and maritime law experts who stood and dedicated their live for the defense and the liberation of Somalia's maritime territory, notably, with Dr, Muna Sharman and late Engineer who passed away after he contracted with the fatal Covid_19 specifically delta variant as substantiated by health officials in the ministry of health, Mohamed Omar Salihi may Allah mercy on him and may his soul rest in peace, at their forefront. Engineer Salihi had hoped to testify, address the court proceedings and witness the victorious outcome of his prolific performance and efforts in this case. I would like to assure you that these two indefatigable and assertive individuals I have mentioned will be forever grateful and reminisced and immortalized in our history for defending our nation and the president did not rule out of building monument on their behalf and will be a loving example and a positive role model for the future generations .

The Somali people and their government will never remain oblivious the diligence and integrity shown by our international team of solicitors and legal experts from Foley Hoeg law firm especially the team of eminent solicitors who were qualified and entrusted by the government to represent our maritime case that included:

I would like to express my deepest gratitude to the federal government's committee who have tirelessly followed and monitored, managed and coordinated all aspects of this case, this committee has been led by the deputy prime minister, H.E. Mahdi Mohamed Guled (Khadar) and included our previous ambassador to Belgium and EU ambassador Ali Said Fiqi, as well as former attorney general Dr, Ali Ahmed Dahir.and his current successor, Suleiman Mohamed Mohamud, the team also included eminent and exemplary jurists such as Hamza Ibrahim Abdullahi, as well.as former ambassador to the UN, H.E, Yusuf Garad Omarand his current successor Ambassador Abukar Dahir Osman (Baalle).

The safeguarding of our national assets was not an easy task, especially considering the extreme and abject circumstances our nation had gone through, and given that it is still recovering from years of destruction, drought and economic crisis and lawlessness.

Nonetheless, the support, patriotism, solidarity and unity shown by the Somali people has been the driving force behind our efforts.

Ever since, I was elected as your president, we were navigating through and encountered plethora of stumbling blocks including political, security, financial and diplomatic challenges which were attempts of Kenyan leadership to divert the Somali people and their government from their decision to deliberate this case only at the international court of justice.

Merely three months after I had assumed the office, the Kenyan leadership initiated to directly meddle in our country's political process by mobilizing and orchestrating political groups in Kenya in order to foment an atmosphere of chaos, anarchy and political turmoil and disarray and funded spoilers and traitors to carry out seditious and subversive activities to undermine and sabotage the election process, but we managed to foil these saboteurs to infiltrate and carry out their heinous and sinister tactics with the intention to coerce Somalia to capitulate and abandon its plan and to withdraw the case from the court.

After the ignominious fiasco of these pressure tactics, The kenyan government resorted to flagrantly and blatantly infringe our sovereignty, the kenyan government spent enormous time and resources in a campaign to politically isolate us and make a pariah state.

Portraying a distorted and negative image of our nation to our neighbouring countries the continent as whole and to the international community.

This distorted image was damaging and offending to our recovering nation's reputation but they didn't stop there. A misinformation and smear campaign aiming to tarnish the reputation of the leadership of the federal government was carried out in Kenya's national media as well as other international media outlets.

The Kenyan government waged a military campaign violating our nation's sovereignty and the public interest of the Somali people, this relentless and brutal military onslaughts or incursions and conducted aerial bombardments and land offensives inside Somalia's borders, these barbaric strikes targeted the lives and properties of Somali citizens, case in point, being the death of innocent civilians, including elders, women and children.in the town of Belet-Hawo and irreparable losses were incurred upon Telecommunications tower that belong to the Somali telecom conglomerates operating in Jubbaland, Somalia.

Additionally, Kenya undertook measures that fall outside of political and diplomatic norms waging strong campaign at the United nations to place Somalia under the UNSC 1267 resolution which would have facilitated the labelling of Somali Business community, government officials and humanitarian workers as a terrorist paving the way for the arbitrary confiscation and expropriation and freezing of their assets and ultimately crippled the teetering economy. Kenyan government took every possible measures to disrupt the due course of the legal case at the ICJ, hoping that this issue would be resolved outside of the court, they also undertook a malicious smearing campaign targeting regional organizations and our partners in the continent and the rest of the world to deprive and deny our sovereign rights to defend our maritime borders through universally accepted legal and judicial means.

Despite these gigantic international pressures, we did not succumb and Yet, the Kenyan government pursued its direct interference in the political process in some of our federal member states, case in point, their direct meddling in electoral issues in jubbaland, despite the outright opposition and disapproval of the general population in the state, including elders, academics, intellectuals, the civil society and notable politicians

We are fully aware of the malicious steps violating or transgressing Somalia's sovereignty that were undertaken by Kenyan government in order to exert colossal pressure to the Somali leadership to come to the negotiating table and facilitate the looting and plundering of Somalia's maritime resources. These included several instances where Kenyan government pledges to facilitate a better relations between the federal government and the government of Jubbaland state if we were willing to withdraw the case from the ICJ.

we have solemnly sworn to uphold the trust placed on us by the Somali public, protect, preserve and defend the constitution. Our religion and moral standards will never allow us to choose political and economic benefits or even ephemeral positions of power over the inheritance of our future generations, we have also sworn to never take ill-gained wealth and would rather live in dignified poverty. Each step we have taken so far and every decision we have made has been based on the protection of the dignity, sovereignty, territorial unity, political independence and the integrity of Somali people and their country.

it is indisputable and irrefutable that Kenyan government applied a giant pressure and directly meddled the domestic affairs of federal member states. However, they have also blatantly attempted to sow discord among the different levels of Somalia's leadership. The federal government of Somalia hereby confirm that we accept the court's decision in line with the international law and norms we hope that Kenyan government will retract its expansionist policies and ideologies and respect the supremacy of the international law and will forgo their misguided and unlawful pursuits, instead we hope that Kenya will conform the court's decision as an opportunity to strengthen fragile relations between two states and promote a mutual cooperation and understanding between two people.

Somalia did not choose to become Kenya's neighbor it was Allah, the Almighty's decision, that we have no choice but to co-exist and cohabitate in peaceful and neighborly manner.

This has always been a Somalia's desire and we will welcome that the Kenyan people are Frank, food and peace loving people. It is my hope that Kenyan authorities and dissenters will strive to make this region more peaceful and prosperous while the region's population collectively strive for better future and inclusive prosperity.

Since international court of justice has delivered its binding verdict on the case that has been the core of the dispute between the two countries.

The federal government of Somalia would like to stress our commitment to peaceful coexistence and cooperative relations between the two countries and their people while instigating United and cohesive front fronts against the terrorists who pose grave and potential threats to the peace, stability and security of the region.

I would like to express my sentiment of jubilation and deep gratitude to all Somali people who have valiantly and selflessly United in support of their government during the lengthy process of the court case. The invincible and indomitable spirit has preluded this victory and the victory does not belong to anyone specific, it does not alienate between pro-government and dissident groups Nor does its credit belong to specific individuals. It is a rather victory that belongs to all Somalis regardless of their clan affiliations, identity and hegemony and will be inherited to our future posterity or progeny.

I would like to take this opportunity to exhort and motivate my fellow citizens to adhere their government and also inspire and urge my fellow politicians to show unity and solidarity at this critical Juncture, work together seriously towards protecting our national interests, while putting aside any personal and vested interests or divergent political views which can inflame war of attrition resulting catastrophic ramifications with worst and dire humanitarian disaster.

The lameduck president has concluded his valedictory speech.

Victory for Somalia long live Somalia and may Allah lead us towards the righteous path of peace, equanimity and good governance.