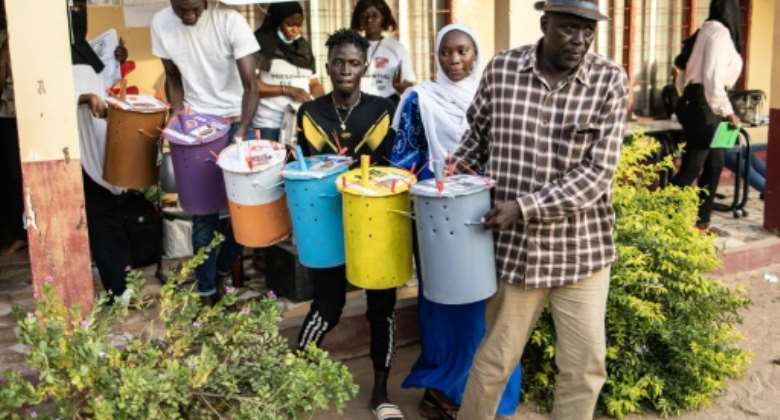 Gambians voted by dropping marbles into coloured tubs, due to high levels of illiteracy. By JOHN WESSELS (AFP/File)

Gambians were waiting Sunday to find out the winner of the first presidential election in the tiny West African nation since former dictator Yahya Jammeh fled into exile, with incumbent Adama Barrow enjoying the advantage in partial results.

Results from only around 15 of the country's 53 electoral districts have so far been published online by the state broadcaster since polls closed at 1700 GMT Saturday.

Speaking on condition of anonymity, an electoral commission official told AFP that results would be published district-by-district, with the commission announcing the winner at the end.

He expected that the count would be finished on Sunday and the result announced by the commission's president.

The ex-autocrat was forced into exile in Equatorial Guinea in January 2017 after Adama Barrow, then a relative unknown, defeated him at the ballot box.

The tourism-dependent economy was also dealt a severe blow by the Covid-19 pandemic.

Political veteran Ousainou Darboe is considered by observers to be the leading opposition candidate.

The 73-year-old is a lawyer who has represented opponents of Jammeh, and who ran for president against the former dictator several times.

International observers will be watching closely for whether the losing candidates accept defeat, one senior diplomat said on condition of anonymity, calling it a "critical moment" for Gambian democracy.

Jammeh lost to Barrow in the 2016 election, but was only finally removed by a military intervention from other west African states.

The 56-year-old former dictator retains significant political support in The Gambia and has sought to influence the vote, remotely addressing rallies of supporters during the campaign period.