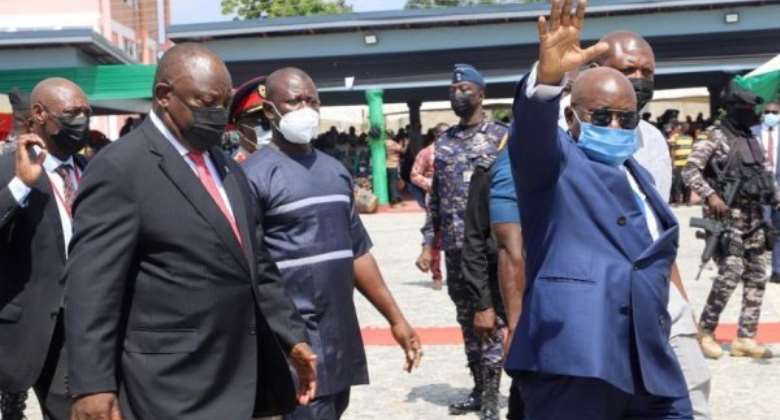 President Nana Addo Dankwa Akufo-Addo Saturday joined the chiefs and people of Asante Juaben in the Ashanti Region to celebrate the 50th anniversary of the enstoolment of Nana Otuo Serebour II as the Paramount Chief of the Juaben Traditional Area.

With President Akufo-Addo was President Cyril Ramaphosa of the Republic of South Africa, and other senior government officials.

The Asantehene, Otumfuo Osei Tutu II, and other paramount chiefs were also present to grace the occasion.

President Akufo-Addo commended the Paramount Chief for his sterling leadership in the past 50 years of reign, contributing immensely to the development of the country.

Nana Otuo Serebour praised the President for creating a district for the Juaben Traditional Area and initiating several development projects to improve the living conditions of the people.

He mentioned, in particular, the construction of a new District Assembly block, bungalows for government workers and judges, provision of streetlights and the asphalting of the main Ejisu-Juaben road.

As the Chairman of the Counsel of State, Nana Otuo Serebour said he would continue to collaborate with members to offer good counsel to the President to design and implement policies and programmes that would transform the country and improve living standards.

He commended the elders and people of Juaben for their continued support throughout the 50 years of his reign, culminating in the provision of social amenities and other facilities to improve their living conditions.

In the years ahead, he would focus on promoting and inculcating the Ghanaian culture and traditions in the youth, specifically touching on respect, hard work, patriotism, commitment and industry.

It was important for the youth to develop good moral values, which were inherent in the Ghanaian culture and, thus, the chieftaincy institution should be ready to teach the younger generation those values, he said.

Nana Otuo Serebour, known in private life as Peter Amponsah, was nominated on August 31, 1971, by his biological mother, Nana Akosua Akyaama II, the then Juabenhemaa, to succeed his uncle, Nana Yaw Sarpong II.

He had then graduated from the Kwame Nkrumah University of Science and Technology as an Electrical Engineer in 1969, and was working with the Electricity Company of Ghana.

He has served in many capacities; both in the chieftaincy institution and in government.

Currently, Nana Otuo Serebour is the Chairman of the Council of State, a position he is holding for the second time in President Akufo-Addo's Administration.

As an entrepreneur, he owns the Juaben Oil Mills and Farms, which produces palm oil for industrial and domestic use and for export.

You have collapse the economy, now you want us to pay E-Levy...
18 minutes ago