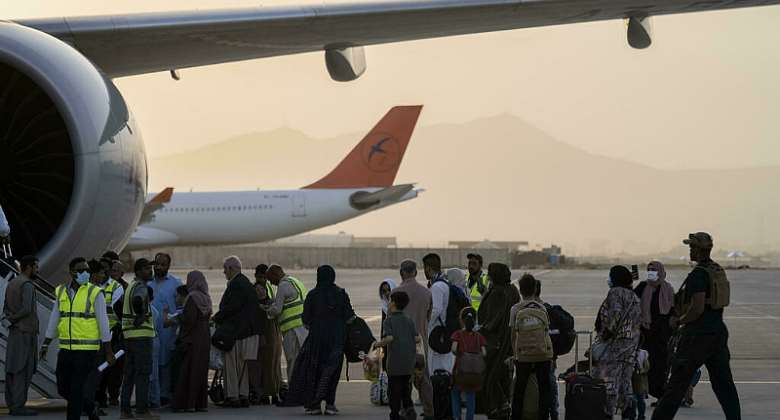 French President Emmanuel Macron, on a visit to the Gulf, expressed appreciation to Qatar on Saturday for helping to organise the latest evacuation to France of more than 250 threatened Afghans.

Qatar has played a significant role both in diplomacy and evacuations at the end of a 20-year war in Afghanistan by Western nations.

"I thank Qatar for the role it has played since the start of the crisis, and which permitted the organisation of several evacuations," said Macron, before heading to Saudi Arabia for the final leg of his two-day Gulf tour.

A flight chartered by Paris flew out the 258 Afghans who were "particularly threatened because of their activities, especially journalists, or because of their links to France, including former locally-recruited civilian personnel for our armies," the French foreign ministry said on Friday.

The same flight carried 11 French nationals and about 60 from The Netherlands, along with dependents.

The ministry said that since September 10, 110 French nationals and their dependents as well as 396 Afghans have been evacuated on 10 flights organised by Qatar.

Diplomatic representation
"We are going to continue," Macron said.
Around half of the 124,000 Westerners and Western-allied Afghans flown out of Afghanistan in the waning days of the US-led military involvement in Afghanistan transited through Qatar.

Several European countries are considering opening a common site for diplomatic representation in the country's capital, Kabul, after the departure of their ambassadors following the capital's fall to the Islamist extremist Taliban in August, Macron said.

After his stay overnight Friday in Qatar, the world's biggest exporter of liquefied natural gas, Macron was heading to the Saudi Red Sea city of Jeddah on Saturday.

Macron will become one of the first Western leaders to meet the kingdom's de facto ruler, Crown Prince Mohammed bin Salman, since the 2018 murder of journalist Jamal Khashoggi inside the Saudi consulate in Istanbul.

Speaking in Dubai, the first stop on his tour, Macron said he had not forgotten Khashoggi but it was impossible to engage with the region while ignoring the powerful Saudis.

The United Arab Emirates signed a record 14-billion-euro ($15.8 billion) contract for 80 Rafale warplanes at the start of Macron's visit.

Latest Photo Reports
Catch up with all the political quotes from our politicians.
Advertise here
More from France
ModernGhana Links
Volunteer firefighters under pressure as France battles historic wildfires
'Red Saturday' warning for France's motorways as holidaymakers hit the road
Friday set to be the hottest day of heatwave, as wildfires ravage France
TOP STORIES