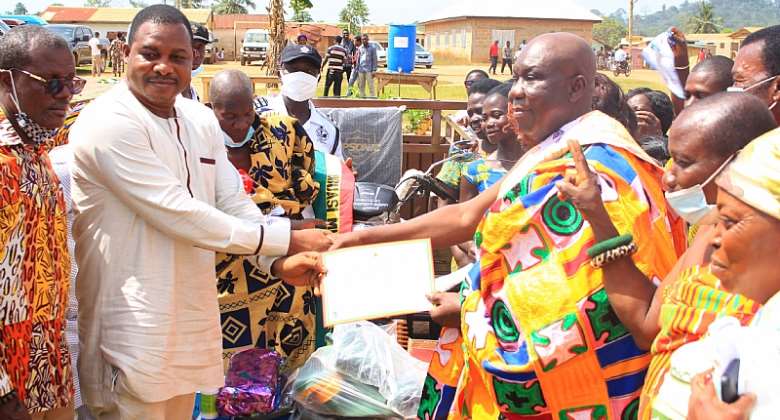 Speaking to the press at the sidelines of the awards ceremony, he bemoaned the lack of interest of the youth in agriculture.

He said since most of the youth are interested in Illegal mining, it has affected the supply of labour in the agricultural sector.

He encouraged the youth to develop interest in agriculture since it is lucrative and profitabl.

Over 52% of people in Obuasi are into agriculture

Contrary to the widely held view that Obuasi was predominantly a mining town with Anglogold Ashanti the biggest employer, the available statistics has revealed that the majority of the people are into agriculture.

The Municipal Chief Executive Honorable Elijah Adansi-Bonah made this known when he delivered his keynote address at the 37th National Farmers' Day celebrations held in Apitikooko in the Obuasi Municipality.

Honorable Adansi-Bonah said, " Obuasi is not affected by the Dutch disease since 52% of our people are into Agriculture whiles 29% of us are in the Public service with only 19% of the people in the Mining sector".

This he said means that agriculture is the mainstay of the people of Obuasi. He seized the opportunity to invite the Youth to venture into Agriculture.

On the theme for this year’s National Farmers' Day Celebrations, "Planting for Food and Jobs – Consolidating Food Systems in Ghana", the MCE said it is a call on well-meaning Ghanaians to come together to consolidate the gains the country has made in agriculture so that "we do not visit events of 1983 when severe drought and famine hit the country."

Planting for Food and Jobs (PFJ) in Obuasi

The Obuasi MCE lauded the President for introducing the PFJ Programme. He said the country witnessed the impact of the programme when Coronavirus sets in. He said during the period, the country had to rely on available foodstuffs since there was no avenue for importation of food items.

He also made known that 2,299 farmers in Obuasi alone have benefited from the PFJ program with 882 of them being females. He added that the farmers were given fertilisers as well as maize, vegetables and cowpea to grow.

Hon Adansi-Bonah cited climate change and activities of illegal miners as the main challenges facing agriculture in the Obuasi Municipality. He however called on all and sundry to build synergy to nip such activities in the bud.

The Obuasi MCE also disclosed that to reduce the incidence of post-harvest losses, a Citrus factory has been established in Obuasi under the Enabled Youth Program which will have a ready market for oranges produced in the Municipality.

He said, "For the vision of the President for our sector to be realised, we need to support Government by protecting our land and water bodies as well as investing in Agriculture".

You have collapse the economy, now you want us to pay E-Levy...
20 minutes ago