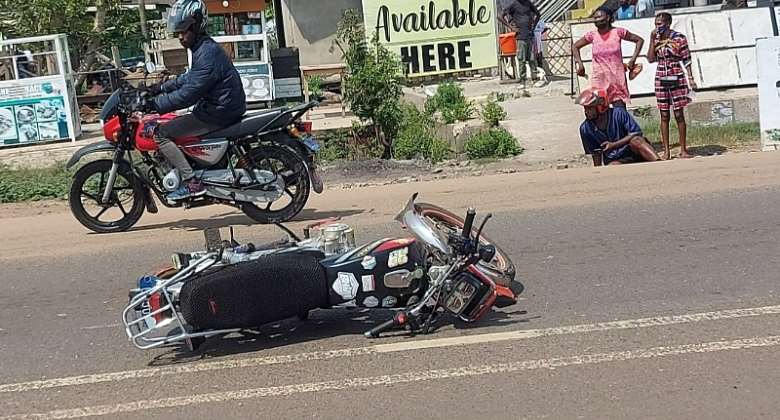 A motorcycle with registration number M-19-GR 809 has knocked down a pedestrian on the Nungua- Kantamanto Road today.

The rider whose name is yet to be known allegedly failed to stop when cars had stopped in an attempt to make way for a pedestrian to cross. However, the rider ended up injuring the pedestrian in the process.

The impact of the accident tossed the motor rider in the middle of the road air bouncing twice on his knee before finally landing on his head.

Immediately, the rider couldn’t look at the bike or the injured pedestrian again. The only thing, he was spotted doing was sitting quietly at the accident scene amidst a constant glimpse of his wounded body with oozing blood from almost every part.

As at the time of the incident, there was no police presence there. However, due to the ongoing celebration of Farmers’ Day, quite a number of police officers were spotted providing security at the Nungua Market Centre opposite the Nungua Senior High School where a cross-section of the residents have gathered to celebrate and honour farmers.

Latest Photo Reports
Catch up with all the political quotes from our politicians.
Advertise here
More from Social News
ModernGhana Links
‘Call your residents to order, nowhere in the world you can enjoy electricity for free’ – Atta-Akyea to Krobo chiefs
Accra: NIA to begin Ghana card replacement, data update services at El-Wak
Let’s remain vigilant against threats of terrorism – Interior Minister
TOP STORIES