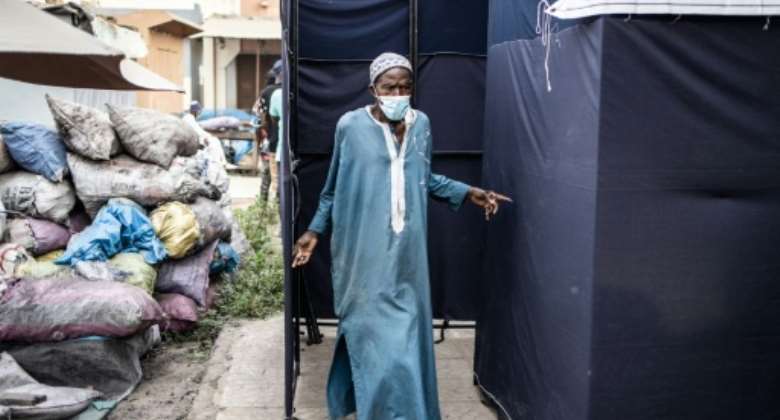 A man leaves the polling booth after casting his ballot in The Gambia, in an election seen as a test of the democratic transition. By JOHN WESSELS (AFP)

Gambians voted on Saturday in the first presidential election in the tiny West African nation since former dictator Yahya Jammeh fled into exile.

The voting will be closely watched as a test of the democratic transition in The Gambia, where Jammeh ruled for 22 years after seizing power in a bloodless coup in 1994.

The ex-autocrat was forced into exile in Equatorial Guinea in January 2017 after Adama Barrow, then a relative unknown, defeated him at the ballot box.

President Barrow, 56, is now running for re-election, and faces five other candidates.

Voting near the presidential palace, he predicted "the biggest landslide victory in the history of this country," saying "in the next 24 hours my people will be celebrating in the streets".

Polls opened at 0800 GMT, with long lines forming well before dawn in the capital Banjul.

Nearly 500 people lined up around the block at a market in the Banjul neighbourhood of Manjai Kunda, ready for hours of waiting.

People wait in line ahead of a polling booth opening in a market in the Banjul neighbourhood of Manjai Kunda. By JOHN WESSELS (AFP)

"Gambia is a peaceful country and we should maintain it that way. If another one (than your candidate) wins, you should respect that."

"It is a very important to vote because we want change," he said. "The times have been hard, the economy is bad."

Many voters in the nation of more than two million people are hoping for an improvement in their living standards.

Each candidate has their own ballot box at Gambian polls, and voters choose their preferred politician by dropping a marble inside one of the boxes. By JOHN WESSELS (AFP)

The tourism-dependent economy in the former British colony was also dealt a severe blow by the Covid-19 pandemic.

Political veteran Ousainou Darboe is considered by observers to be the leading opposition candidate.

Speaking as he voted in Serekunda, near Banjul, Darboe thanked God, saying "he has given me the strength to conduct my country".

The 73-year-old is a lawyer who has represented opponents of Jammeh, and who ran for president against the former dictator several times.

President Adama Barrow's supporters hope he will be re-elected. By JOHN WESSELS (AFP)

Each candidate has their own ballot box at Gambian polls, and voters choose their preferred politician by dropping a marble inside one of the boxes.

The unusual voting method is because of low literacy rates in the country.

Initial results in the one-round presidential election could be announced as early as Sunday.

The 56-year-old former dictator has also sought to influence the vote, remotely addressing rallies of supporters during the campaign period.

A truth commission has heard hundreds give testimony about state-sanctioned abuses under former dictator Yahya Jammeh. By ROMAIN CHANSON (AFP)

Another political camp, however, is pushing for criminal charges against Jammeh for alleged abuses committed under his rule.

Barrow set up a truth commission to probe the alleged abuses after coming to office.

Before hearings ended in May, it heard testimony from hundreds of witnesses about state-sanctioned death squads, witch hunts and forcing bogus cures on AIDS patients, among other abuses.

The commission recommended in November the government pursue criminal charges, in a final report that it handed to Barrow without releasing to the public.

There are also growing concerns about Barrow's enthusiasm for prosecutions, despite previous rhetoric that was tough on Jammeh.

In September, for example, Barrow's NPP party announced a pact with Jammeh's APRC -- in a controversial move that was viewed as an electoral ploy.

Jammeh said that decision was taken without his knowledge, and his supporters have formed a rival party. But rights groups fear the pact will diminish chances of a trial.