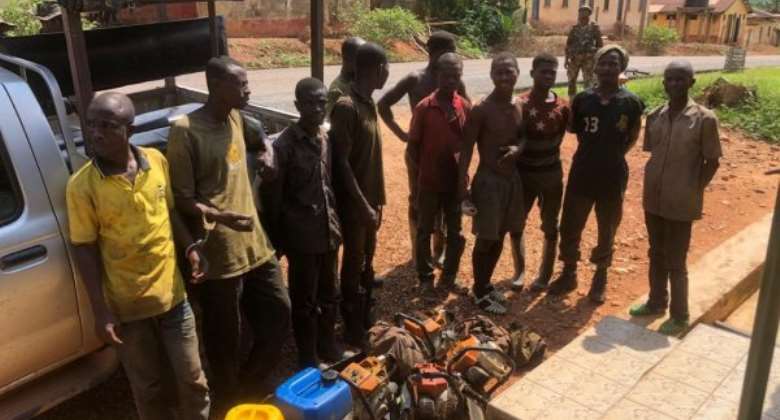 The Forestry Service Division of the Ghana Forestry Commission, Akim Oda District, has arrested 11 illegal chainsaw operators, for cutting down trees, at the boundary between Akim Oda forest and Assin Fosu forest.

Mr Ernest Adofo, Akim Oda District Manager of Forestry Service Division of the Forestry Commission, speaking with the Ghana News Agency, said on the eve of Dec 02, 2021, Officials of the Forestry Division, received a call that, illegal activity in cutting down of trees was going on in the forest.

He said at about 0300hours on that same day, the military together with the officials went to the forest and unfortunately for the suspects, they were arrested.

The equipment belonging to the illegal chainsaw operators used in felling down the trees, were seized and is currently at the custody of the Forestry Division, Akim Oda District.

The suspects have been handed over to the Akim Oda Divisional Police Command, to be arraigned before court.

He said the suspects, are from Breman Asikuma, in the Central Region.

The District Manager, cautioned the general public to desist from illegal cutting down of trees, which hampers the climate.

He called on all to help monitor and protect the forest because since they depended on the trees for their respiratory processes.