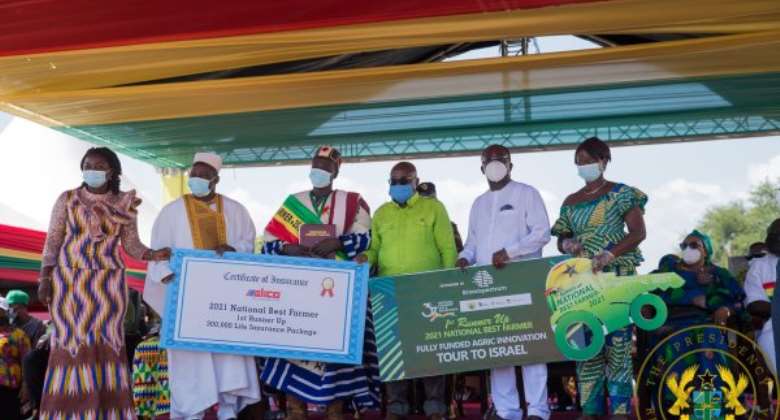 Mr Sulemana Yidana, a 70-year-old crop farmer, who was the First Runner-up of the 37 Farmers' Day celebration, said he dedicates the award to his eight wives and 40 children.

The proud farmer from Dabreboari in the North East Region had won nine different Farmers' Day awards since it was instituted in 1985.

He received a tractor, trailer, Disc Plough, a Boom Sprayer and Ghc300,000 worth of insurance cover from GLICO and a study trip to Israel at the event, held at the Adisadel College Park in Cape Coast, which saw some 165 farmers and fishers receiving juicy prices.

Mr Yidana told the Ghana News Agency (GNA), after receiving his award, that his wives were great sources of inspiration and encouragement to his agribusiness.

He narrated how he had left home very early and stayed late on his farms depriving his wives and children from seeing him.

“This is the sacrifice I make to enable me to increase yield, not only for wealth creation but also to help me educate my children and support my wives and other people in my community,'' he said.

The 2021 Farmers Day was on the theme: "Planting for Food and Jobs: Consolidating Food Systems in Ghana".

The overly elated Alhaji Yidana, who had been a farmer for more than three decades, praised his family for the enormous support and guidance.

Mr Yidana, though did not receive a formal education, urged the youth, no matter their educational backgrounds, to venture into farming for wealth creation and promotion of food security.

Recounting his days as a beginner, Alhaji Yidana said like every other vocation, farming was not easy but through hard work and resilience, he now owned acres of farm lands with different crops, including plantain and cashew.

The awards saw Alhaji Mashud Mohammed from the Mion District of the Northern Region emerging the 2021 National Best Farmer and received GHc600,000 from the Agricultural Development Bank, 500,000 worth of insurance cover from GLICO and a study trip to Israel, sponsored by Broadspectrum Limited.

Reverend Samuel Sida from the Asutifi North District of the Ahafo Region was the Second Runner-up and was presented with a Nissan Navara Double Cabin Pick-Up and Ghc200,000 worth of insurance cover by GLICO.

Mr Kweku Ehun from the Gomoa West District of the Central Region was the Overall Best Fisherman and would receive a two-bedroom house built at his preferred location.

Scores of other awardees expressed their gratitude to the Government for recognising their efforts regardless of the numerous challenges confronting the agricultural sector.

What's the big deal if military is withdrawn from Speaker Ba...
18 minutes ago

Bogoso explosion: 500 houses blown into pieces at Appiatse
20 minutes ago