ECOWAS Deploys 74 Observers for the Presidential Election in The Gambia 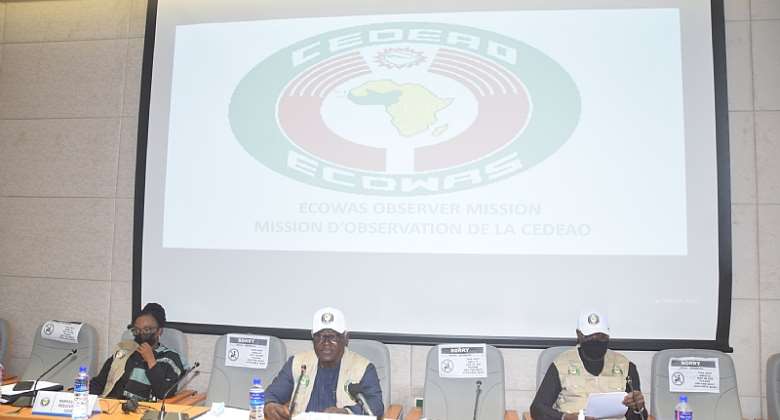 Head of ECOWAS-EoM, Commissioner PAPS and ECOWAS Rep in The Gambia

As part of the ECOWAS electoral support to Member States, H.E. Jean-Claude Kassi Brou, the President of the ECOWAS Commission, approved the deployment of twelve (12) long-term observers (LTOs) and sixty-two (62) short-term election observers (STOs) to The Gambia to support and monitor the entire electoral process.

The observers include Members of the ECOWAS Parliament, Community Court of Justice, Representatives from Ministries of foreign Affairs from Member States, Election Management Bodies (EMBs) and Election Experts from the Region.

While thanking the Observers, Gen. Francis Awagbe Behanzin, Commissioner Political Affairs, Peace and Security of the ECOWAS Commission, highlighted that ECOWAS electoral assistance to its Member States finds its justification in ECOWAS Supplementary Protocol on Democracy and Good Governance of 2001 and the decision of the Authority of Heads of State and Government relating to the timely deployment of pre-electoral missions and observations in the member states organizing elections.

President Koroma stressed to the Observers that it is imperative that they succeed in their Mission to ensure that the presidential election is transparent, free, fair, credible, peaceful and inclusive, and that ECOWAS standards are maintained in the process.

“While noting the importance of security for the electioneering process, it is pertinent for me to state that our mission here rests more on ensuring that our contribution will help the country for a smooth running of the process. If this is the case and each candidate accepts the verdict of the ballot, there will be no winner or loser but only one winner, the Gambian people”, he added.

The Head of Mission expressed the region’s collective appreciation to the current Chair of the ECOWAS Authority of Heads of State and Government, H.E. Nana Akufo-Addo, President of the Republic of Ghana, for extending the regional support to The Gambia through the extension of the Mandate of ECOMIG forces and deployment of high-level mission of solidarity and support to The Gambia.

ECOWAS has extended support to the democratic process in The Gambia and is committed to accompanying the government and the people through the Presidential Election. The ECOWAS support to The Gambia include: several diplomacy preventive missions, the operational deployment of the ECOMIG Mission, engagements with the country institutions, training on Dialogue and Mediation for Peace Actors and other stakeholders in The Gambia, among others. This indicates the importance ECOWAS places on peaceful electoral processes in the Region.