When Death Is Used As A Weapon 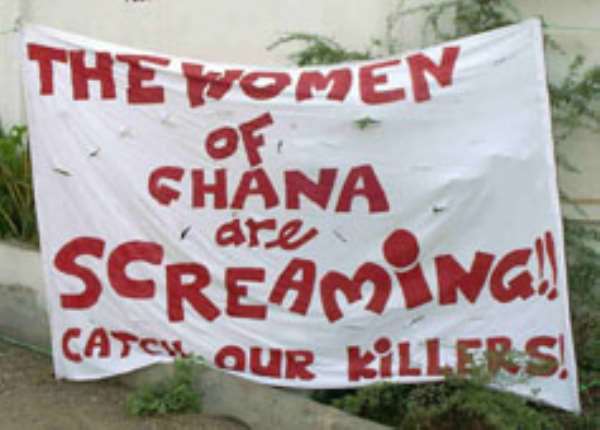 -The case of the murdered women.

Death, we all know has been with us since the creation of this world, it is also seen as a final rest from this dangerous world of ours. What makes it so sad is how others pass through the exit door of this world. While others are fortunate, you will understand me later, to pass away whiles sleeping others pass through this door the painful way like the thirty-four {34} women murdered in cold –blood by faceless people with no heart.

These were the mothers of our nation’s next parliamentarians, ministers, president{s}. These mothers were going to give to Ghana, engineers, doctors who won’t leave the shores of Ghana to wash balls in western countries but heartless people murdered these women who were doing their normal duties, all geared towards making Ghana a develop country and not a HIPC country.

What makes the death of these women so sad is that someone knows of the people who did that and for 3 years kept quite for the children and families of these women to go through such pain, I think is inhuman.

Mr. Jerry Rawlings, the ex-president of this great country of ours sworn under oath to defend and uphold the good name of Ghana and to sit down for 3years before coming out to use it as a political weapon to win votes in the next general elections, think you did not defend the good name of Ghana and the people who live in that community that is called Ghana.Mr. Rawlings, I think will do the people of Ghana a great dis-service if he keeps quit or try to use the pain of someone to win political votes.

He been the ex-president of Ghana, is on record as saying he does not trust to the Police administration so will like to be provided with a lie detector before he mention the names of these killers. I think the government should provide Jerry Rawlings with a lie detector although these device was not used when the citizens vetting committee was in place and I don’t think it was used when peoples assets were confiscated.

Now you ask yourself why has the death of these women suddenly be an issue? The answer is not far fetched, because Victor smith in an interview with Space fm a radio station in Brong-Ahafo, which I listened online at myspacefm.com, said Mr. Odoi Sykes, said the killings will stop when the NPP was voted in to power and it stopped when they won the 2000 elections, so my question is that does Victor Smith thinks that statement won the elections for present government and that they too are going to use the pain of others to win votes?

You ask yourself, why this demonstration and counter demonstration, although its their right to exercise, why is this happening within this short time or is an unseen hand behind these demonstration or are these parties trying to use the pain of Ghana to gain and win political votes, they should not forget that the affected families are going to vote and until the real truth is known they won’t know who to vote for, if these deaths are going to be used as campaign or political message because we’ve had enough of unclean and propaganda politics.

Now you understand why others are fortunate to pass away in their sleep, whiles the mystery surrounding the death of others are yet to be uncovered. Kwaku Amoh Mensah Tsibu, space fm online, New York Views expressed by the author(s) do not necessarily reflect those of GhanaHomePage.