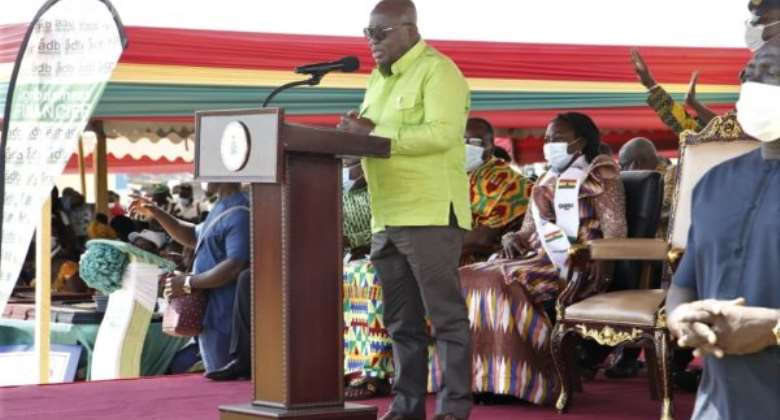 The government is working towards establishing a Farmer Database Scheme to track the subsidised fertiliser distribution programme to halt smuggling.

The Ministry of Food and Agriculture will also take the biometric data of beneficiary farmers to aid in authentication.

President Nana Addo Dankwa Akufo-Addo announced this at the 2021 National Farmers' Day celebration at the Adisadel College Park in Cape Coast on Friday.

He said the number of farmers benefiting from the subsidised fertiliser distribution programme had increased from 597,662 in 2016 to 1.2 million as at October 2021.

President Akufo-Addo urged all stakeholders in the agriculture value-chain to support the sector policies and interventions to ensure sustainable livelihoods and an improved economy.

Government would strengthen linkages of the Planting for Food and Jobs and the Rural Industrialisation Agenda to improve livelihoods and empower Ghanaians, he said.

The investment in the agricultural sector, over the past five years, was yielding positive results, complemented by the efforts of the farmers and fishers to prevent food shortage during the COVID-19 pandemic, the President said.

The Ghana COVID-19 Revitalization of Enterprises Scheme, otherwise known as 'Ghana-Cares' or Obaatanpa programme, with GHc100 billion budget projection from both government and the private sector, had components for youth who wanted to enter into agro- processing and agribusiness, he said.

He, thus, urged the youth to take advantage of the Scheme to establish themselves in those areas to be self-sufficient and create jobs.

Alhaji Mashud Mohammed from the Mion District of the Northern Region was crowned the 2021 Overall Best National Farmer.

He received GHc600,000 from the Agricultural Development Bank, 500,000 worth of insurance cover from GLICO Insurance and a study trip to Israel, sponsored by Broadspectrum Limited.

Mr Suleman Yidaana from the East Mamprusi District of the North East Region was the First Runner-up and received a tractor, trailer, Disc Plough, a Boom Sprayer and Ghc300,000 worth of insurance cover by GLICO Insurance and a study trip to Israel.

Reverend Samuel Sida from the Asutifi North District of the Ahafo Region was the Second Runner-up and was presented a Nissan Navara Double Cabin Pick-Up and Ghc200,000 worth of insurance cover by GLICO Insurance.

Mr Kweku Ehun from the Gomoa West District of the Central Region was the Overall Best Fisherman and would receive a two-bedroom house built at his preferred location.

A total of 165 gallant farmers and fishers across the country were rewarded for their sterling efforts in sustaining the economy through the production of food and cash crops as well as fish over the period.

This year's Farmers Day was celebrated on the theme: "Planting for Food and Jobs; Consolidating Food Systems in Ghana.,"

President Akufo-Addo was the Guest of Honour, and Odeefuo Amoakwa Buadu VIII, the Paramount Chief of Breman Asikuma Traditional Area and President of the Central Regional House of Chiefs, the Chairman.

The Ministry of Food and Agriculture, the Ministry of Fisheries and Aquaculture Development and the Ghana Cocoa Board jointly hosted the colorful and well attended programme to recognise the enormous contributions of Ghana's gallant farmers and fishers.