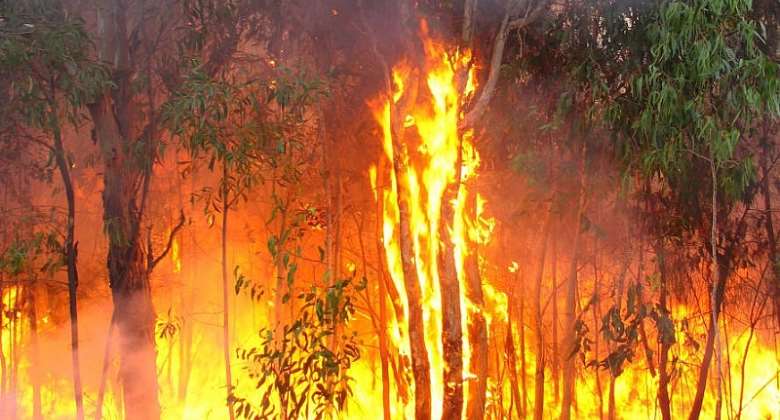 He, therefore, cautioned farmers, palm wine tappers, and smokers to be wary of the way they handle naked fires, warning that offenders would be prosecuted.

Speaking in an interview with the Ghana News Agency (GNA) on the side-lines of the Techiman North Municipal Farmers Day celebration, held at Bonya, DOII Prempeh warned the youth in the area against group hunting saying, culprits could be either fined or imprisoned or both.

He said the Municipal fire command had revived 30 energetic and strong fire volunteers in five communities and tasked to intensify patrols in the area to help control fire outbreaks.

The fire volunteers are selected from Bonya, Bonya-Nkwanta, Amangoase, Hiamankyene, and kyeremogya communities and they have been supplied with Wellington boots, cutlasses, identification cards, and T. Shirts.

DOII Prempeh said fire outbreaks had witnessed a drastic reduction in the municipality and commended the fire volunteers for their dedicated services.

Though he could not immediately provide statics on the fire cases, the Municipal Fire Commander said this year's fire outbreaks saw about 80 per cent decrease as compared to 2020.

Mr Paul Tolon, the Techiman North District Director of Agriculture identified lack of irrigation facilities and land availability for agricultural mechanization as a major challenge in the area.

He said farming was a lucrative business and advised the farmers to invest more in their farm work, and also take advantage of the government's social intervention programmes to expand their farm work as well.

Mr Tolon said it was untrue farming was reserved for the poor and advised the teeming unemployed youth in the area to engage in commercial farm work to enhance their socio-economic livelihoods.

Hottest Photo Reports
Catch up with all the political quotes from our politicians.
Advertise here
More from Science & Environment
ModernGhana Links
Atewa Forest is a ‘no go area’ for mining — A Rocha Ghana warns GIADEC
Humanity uses up full year's global resources by July, now living on credit
How fishers & fishmongers are battling for survival on the frontier of climate change in Ghana
TOP STORIES