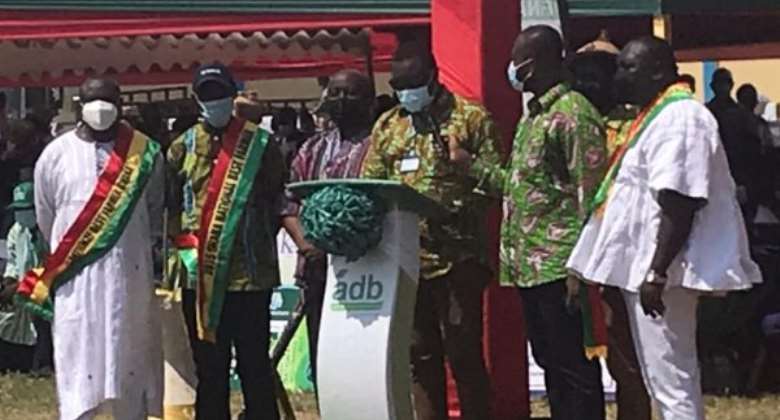 Mr Martin Agyei, a 49-year-old farmer from Tuobodom has been adjudged the Techiman North District Best Farmer in the Bono East Region.

He has 165 acres of farms including, 75 acres of mango and 65 acres of cashew plantation as well as acres of plantain, maize, coconut, and vegetables, cattle, sheep, and goats.

For his prize, Mr Agyei received a motor king, cutlasses, wellington boots, wax print, key bar soap, and two spraying machines at a ceremony held at Bonya, a farming community in the district.

Mr Job Osei, a farmer from Tanoboase was adjudged the second best farmer and he received a motor king, two spraying machines, cutlasses, wax print, and key bar soap, while Mr Thomas Kuupuour, a farmer from Offuman was the third best farmer.

He also received a motorbike, cutlasses, bars of key soap, a spraying machine, and wax print.

Other eight deserving farmers in the district were presented with prizes including wax print, bars of key soaps, wellington boots, cutlasses, and other consolation prizes.

Addressing the farmers, Mr Evarson Addo Donkor, the Techiman North Municipal Chief Executive commended the award winners and farmers in the area for their hard work.

He said the government was working hard to improve on road networks as well as extend electricity to open up deprived communities in the district.

Mr Donkor said the government's flagship Planting for Food and Jobs (PfFJs) was implemented to enable farmers to expand their farm work and improve on food production and advised farmers who were yet to register to do so for their own good.

This would help them to have better bargaining power for their produce and also greatly help them access financial support to expand their farm work.

Finance Minister announce transactions to be excluded from E...
18 minutes ago