A white elephant project in Gabon provides shelter for squatters 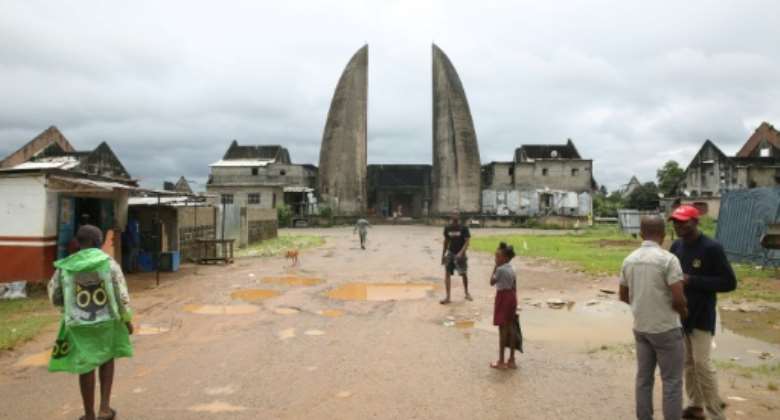 In Gabon's capital, hundreds of families have set up shanties on the site of a grandiose failure. By - (AFP)

Every day in Gabon's capital Libreville, dozens of children use wheelbarrows to bring jerry cans full of water to families living on the site of a grandiose failure.

The International Centre of Bantu Civilisations (CICIBA) was meant in the 1980s to become a cultural showcase, but its sprawling premises have instead today become home to hundreds of poor families.

The concrete walls have decayed, patched-up electrical cables hang between shacks, and trash cans are piling up along the road.

"More than 2,000 people live here" in great precarity, says Apollon Mekoghi, president of the association of squatters of the CICIBA.

The centre was created to safeguard the heritage of African peoples living south of the equator.

There is no running water at the half-built International Centre of Bantu Civilisations. By - (AFP)

The aim was to promote the culture of the Bantu tribes, present in central and southern Africa, who share linguistic roots as well as certain traditions and beliefs.

At the instigation of the late president Omar Bongo Ondimba, host country Gabon spent more than $17 million to start building the cultural centre in the north of Libreville.

Two huge concrete elephant tusks were set up to guard the entrance, and a theatre was built.

But then the funds ran out, as countries wracked by civil war were unable to finance the rest of the project.

The CICIBA became a white elephant, an outsized project that never saw the light of day.

More than 400 families now live on the site of the half-finished cultural centre. By - (AFP)

Only a few of the planned buildings ever made it out of the ground, before being left abandoned for several years.

The first squatters arrived in 2013.

Mekoghi said he first moved to the site after the university campus where he was previously living was destroyed.

"I found myself homeless, so I came here," said the head of the squatters' association.

More than 400 families now live in the CICIBA.

"As soon as someone wants to settle in, he submits his application," explains Mekoghi. He then does a quick background check to see if they are in the country legally.

"If he is accepted, he can come and build his home."

Makeshift shanties without running water dot the alleys of the centre, a veritable labyrinth that spans several levels.

The inhabitants sometimes crowd a dozen at once into a few square meters, providing fertile ground for the spread of diseases, such as typhoid fever.

Francoise Moughola, 40, has lived in the shanty town for seven years. A mother of 12 children, she has just lost her husband.

"It's hard for all of us," she says, busy washing and ironing clothes.

"I don't know how to live with twelve kids, I can't even afford to get them into school."

The vast majority of residents are Gabonese, but some squatters are foreigners.

They include Sika, a 34-year-old Central African who arrived in 2016 after fleeing civil war in his country.

He says life is tough.

"We have water delivered only once a day by tankers. It's not enough," he says.

"We sometimes have to choose between washing or cooking."

'Everyone wants to leave'

One resident said he was ashamed at the beginning to say that he lived in the CICIBA. By - (AFP)

Gabon, a small nation of about 2.1 million souls along central Africa's Atlantic coast, is one of the continent's largest oil producers and one of the wealthiest countries per capita in the region.

But the World Bank said a third of the population was living below the poverty line in 2017.

Along the alleys of the abandoned cultural centre, there are bars, stalls and even churches.

Squatters are not charged rent, but must pay 20,000 CFA francs (about $33) each month for electricity. The power is cut off as soon as the inhabitants are unable to pay.

But Lilly Loundou, 31, who arrived two months ago, says she cannot even begin to afford a little.

"So I live without electricity," she says. "I'm in the dark all the time at home."

Marc Malomba, a member of the squatters' association, says he wished he could live somewhere else.

"Everyone wants to leave," he says.

Not far off, Jessye Angounie, who has lived at the abandoned centre with his wife and two children for two years, agrees.

"I was ashamed at the beginning to say that I lived here, I hid it," he says.

But despite the difficult living conditions, Mekoghi says people keep asking to move in.

"We still have many families waiting to settle here," he says.

COVID-19: Our responsibility to one another is to get vaccin...
42 minutes ago

Bawku disturbance: Cooperate with government to ensure peace...
50 minutes ago